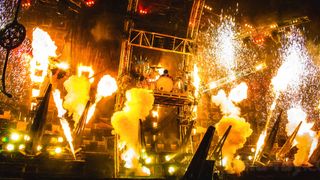 It was rumoured that Alice Cooper was going to “execute” Motley Crue at the climax of their final tour, providing a full-stop to the band’s chaotic 35-year career. In the end they departed in a storm of pyro and confetti, as fans wept and nervous roadies put away their fire extinguishers for the last time.

Here are the highlights from the film of that night, Motley Crue: The End.

There’s so much pyro in this movie you can almost feel the heat from the screen. Fire launches with thrilling regularity from every conceivable part of the stage, and at one point Nikki Sixx’s bass guitar is turned into a flame thrower. It’s so intense Red Adair is probably on standby in the wings.

Despite moving like a slow motion crab and looking like the oldest man to have ever walked the earth, Mick Mars’s bony, tattooed fingers are as fluid as those of a skilled youngster. Musically, he’s the best part of the film.

When you sign a legal agreement to never perform onstage together ever again, you’re given carte blanche to say what you like about the other members of the band, knowing full well that you won’t have to spend another six months together on a tour bus. And so they all reveal how much they don’t get on, the ultimate dysfunctional family.

The ‘say whatever the hell you like’ memo obviously reached the band’s tour manager, who provides several laugh-out-loud moments explaining the band members’ relationships with each other. “Some days they like each other, some days they don’t,” he says. “Most days they don’t.”

Did we mention the pyro yet?

Tommy Lee has a hoverboard, which he uses to gleefully roam the backstage corridors like a spoilt nine-year-old with ADHD. It’s exactly the kind of toy you’d expect him to own.

Tommy Lee’s drumkit gymnastics have evolved over the years, and film of Lee’s current “Cruecify” extravaganza has been shared on social media to the point where there are no surprises left. But on their final night on earth, there’s one unexpected twist.

It’s possible we’ll never tire of Heavy Metal Parking Lot-style interviews with excited fans baring breasts and showing off tattoos and screaming “Motley fuckin’ Crue!” at anyone with a camera. And this film has plenty.

At the end of the show the band step onto a small stage in the centre of the arena, Tommy Lee at a battered grand piano, and play Home Sweet Home. The intimate setting is at odds with the vast scale of everything else, and at odds with the way they talk about each other.

But as the confetti tumbles and the band play their last few notes together, you get a real sense of that us-against-the-world, fuck-the-critics, one-for-all-and-all-for-one mentality that’s driven them to such vast success. And as the camera lingers on sobbing, distressed fans, there’s no denying the strength of the bond they share with their audience.

Yep, it’s pyro again. Watching The End is like getting a front row seat for the burning of the Kuwaiti oil wells at the end of the Persian Gulf War. It’s like living through the apocalypse. It’s like an indoor version of Mad Max: Fury Road. It’s insane, and it’s really worth being confronted by on the big screen.