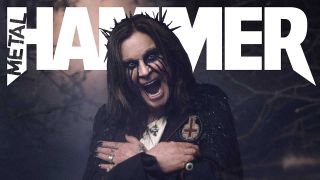 In the latest issue of Metal Hammer, we give you a world exclusive interview with Ozzy Osbourne, as the Prince Of Fucking Darkness prepares to go out on the road for his No More Tours 2 tour. With fellow British metal royalty Judas Priest in tow, it’s shaping up to be one for the history books, but is this really the end of the road for Ozzy? And how is he coping with having to wind his 50-year career down?

Here are ten things we learned from our candid – and often hilarious – interview with the Double O.

His words, not ours. While Ozzy is absolutely slowing down his career a little – don’t expect any more monstrous world tours or gruelling promotion cycles – we haven’t seen the last of him quite yet. “This is not my farewell tour!” he yells. “What I’m doing is that I’m not going to leave the house in January and come back in December any more.”

“I don’t drink any more, I don’t smoke, I don’t do drugs...and I like it!” he grins. “I never thought I’d see the day where Ozzy Osbourne says he prefers being clean and sober, but so far, so good!” Judging by his recent performances, it’s working a treat, too. “I’m definitely singing better than I have been,” he agrees.

Lemmy gave him some wise words

“Before he died, he said to me, ‘Well, I could have had ten more years if I did all the proper things, but I did things my way...’ He knew what he was doing. I miss him being around.”

He thought he’d be long dead by now

Ozzy listing his mishaps and injuries basically sounds like something out of a Wile E Coyote cartoon. “I’ve fallen out of life shafts and windows. I broke my neck on a quad bike. There was one time when I died twice on the way to hospital. I might be unsinkable!” You know what, Ozz, we might just have to agree with you.

He wants to make another record

...but it’s no sure thing. While the return to Zakk Wylde to the Ozzy fold in recent years has left fans hoping we might get at least one more studio album out of the Double O, Ozzy isn’t so sure – not for the lack of ambition, mind. “I’d love to make an album, but it costs so much to make a record,” he sighs. “Then kids go, ‘OK, I’ll steal that,’ and that’s it. But I do want to make one. I’ve got 10 ideas for songs. And the thing is, I have to like it.”

Doing The Osbournes TV show was a hard experience

The show that turned Ozzy and his family into reality TV legends may have been fabulous entertainment, but it took a toll on Ozzy himself. “I thought it was gonna be a piece of cake,” he explains, “but you have a camera crew living in your house for three and a half years and see how you feel at the end of it. You feel like a fucking laboratory rat. It got to the point where I was falling apart emotionally.”

He’s not a hands-on grandad

Ozzy loves his grandkids, but don’t expect him to be elbow-deep in poo and baby powder any time soon. “My two granddaughters are fucking great fun! [But] I’m not having shitty diapers on my fucking knee. When it comes to that department, I don’t go there. I don’t like my own shit, let alone anyone else’s, ha ha!”

He still loves what he does

“This tour has been great and we’re having a fucking blast,” he smiles. “If listening to my music or watching a show has given someone a better day, that’s a great feeling.” We’re pretty sure there’s plenty of people who fit into that category, pal.

He wouldn’t change a thing

“We all have regrets,” he muses, before hastily adding: “I wouldn’t change any of it because it was all my destiny. I believe in fate. One day you’re down on your luck and the next you’re flying high. If I hadn’t done things the way I did, it would be a different story.”

Pick up the latest issue of Metal Hammer to read our full cover story with Ozzy, and order your exclusive Prince Of Darkness bundle featuring a signed and numbered Ozzy art print now while stocks last.