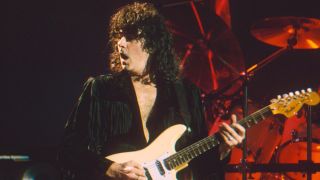 It’s been a long time coming. Blackmore hasn’t played heavy rock since he disbanded Rainbow in the mid-90s.

Since then, he has indulged his love of medieval folk music with his group Blackmore’s Night, fronted by his wife Candice Night. What’s more, he has done so while dressed like a member of a battle reenactment society.

But now, finally, the guitar god has answered the prayers of his most devoted fans. In June 2016, he will lead a new version of Ritchie Blackmore’s Rainbow at three European dates, playing not only Rainbow songs but also classic material from the band in which he made his name, Deep Purple. The UK date will take place on June 25, at the Genting Arena in Birmingham.

Let’s not be coy about this. The new singer in Rainbow, Ronnie Romero, is going to have a hard job on his hands: performing legendary songs that were originally sung by such iconic figures as Ian Gillan, David Coverdale and that other Ronnie – the late, great Ronnie James Dio.

But Ritchie Blackmore is back to doing what he does best. That’s all that really matters. And so, it is with a frantic sense of anticipation that we present: The 10 Songs That We’re Begging Ritchie Blackmore To Play In 2016.

Over to you, Ritchie…

10. Catch The Rainbow
On the first Rainbow album – released in 1975, and modestly titled Ritchie Blackmore’s Rainbow – there are many great tracks: Man On The Silver Mountain, Sixteenth Century Greensleeves, The Temple Of The King. But the biggie – in terms of Blackmore’s guitar playing – is Catch The Rainbow, on which he demonstrated a subtle mastery of the blues.

9. Lazy
From 1971’s Machine Head, arguably Purple’s greatest album, Lazy is the coolest, grooviest song ever recorded by their classic Mark II line-up. Gillan defined it as “rhythm and blues”, and they way the band played it allowed plenty of room – for Blackmore in particular – to improvise and really cut loose. How great it would be to hear him do so again.

8. I Surrender
Poor old Joe Lynn Turner. Having sung with Blackmore in both Rainbow and Purple, Turner had reckoned he was a shoo-in for the Rainbow reunion. Not so. What can’t be denied, however, is Turner’s place in Rainbow’s history as the voice of the band’s biggest hit, I Surrender – number three in 1981. With a hit as big as this, it would be madness not to play it.

7. Mistreated
Like Turner, David Coverdale also fancied a last hurrah with Blackmore. When it didn’t happen, Coverdale had to content himself – if no one else – with The Purple Album, on which Whitesnake murdered various songs that Cov had originally recorded with the Purps in the 70s. One such song is Mistreated, the heavy blues number from 1974’s Burn. After Blackmore quit Purple, he continued to perform Mistreated with Rainbow. It is, unquestionably, one of his signature songs.

6. Long Live Rock ‘N’ Roll
The title track from Dio’s final album with Rainbow is one of the great rock anthems of the 70s. In that respect, this one is a complete no-brainer.

5. Speed King
There is one album that cannot be ignored: Deep Purple In Rock. It was this record that defined the band, and defined Blackmore as one of the greatest and most influential guitarists of all time. But now, 45 years on, what song to play? It can’t be Child In Time – it’s too synonymous with Blackmore’s nemesis, Ian Gillan. So it will have to be Speed King, a deafening blast of head-banging rock’n’roll that set the tone for an album that would shape the sound of heavy music for generations to follow.

4. Since You Been Gone
It’s Rainbow’s most famous song – a top ten hit in 1979 – and it features not one but two brilliant solos from Blackmore. Nobody could ever sing it the way Graham Bonnet did, but if there’s one song in the whole Rainbow catalogue that screams ‘crowd-pleaser’, this is it.

3. Burn
If there is one song, above all others, that will prove just how good Ritchie’s new band is, it’s Burn. Super-fast, super-heavy, super-melodic, it’s the crowning glory of Deep Purple Mark III. Ronnie Romero would face a Herculean task singing parts that were originally laid down by Coverdale and the Voice Of Rock, Glenn Hughes. Good luck with that. And for David Keith – the drummer in Rainbow, and also Blackmore’s Night – an equally daunting challenge, because what Ian Paice delivered on Burn was a performance of such power and virtuosity it made John Bonham sound like a pub band drummer. Are they up to it? There’s only one way to find out…

2. Stargazer
There are many epic Rainbow tracks, but this is the mother of them all – the towering centrepiece of the band’s defining album, Rainbow Rising. Stargazer is Blackmore’s Kashmir. Yeah, that big.

1. Smoke On The Water
Well, he’s got to, hasn’t he? Duh, duh, der! Duh, duh, der-der! It’s the most famous riff in the entire history of rock. Last song of the set. Gotta be. Only it’s Ritchie Blackmore we’re talking about here. An enigma. Always was, and still is…