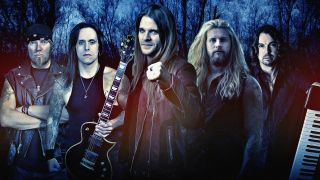 Swedish/American power metallers Northtale were born out of a desire to create a power metal band that harked back to the "golden age" of the genre: the late 90s, when Halloween and HammerFall reigned supreme.

Following the release of their debut album Welcome To Paradise, we caught up with guitarist Bill Hudson to find out which power metal anthems had the most impact on him.

"I'm still unsure that this list is in the correct order... it's very hard to pick them by importance, so take this as a comprehensive list for anyone that wants to know where power metal came from, and what records have truly stood the test of time," he explains.

"I'd have had a much easier time putting this together if it was a top 20 list though..."

Here are his top picks...

"No matter how you slice it, the style we now call “power metal” started right here. Yes, there had been earlier releases that had elements of that sound - maybe going as far back as 1983 - with Warlord’s Deliver Us.

"Even Helloween’s own previous release Walls Of Jericho (also on this list) has some very melodic power metal moments.

"But when singer Michael Kiske joined the band in 1987, the combination of his incredible voice and Kai Hansen’s fantastic song writing resulted in a genre defining album (or two).

"I’d go out on a limb here and say Eagle Fly Free is the ONE song that everyone is still trying to copy to this day."

Notable tracks: Eagle Fly Free, Future World, Twilight of The Gods, I Want Out, Halloween and Keeper of The Seven Keys.

"Before Kiske was ever a part of the band, Hansen was already writing, performing and in this case, singing amazing music, albeit here his thrash metal influence becomes more apparent.

"Guardians and How Many Tears are among some of the more “power metal” moments on this record, while Ride The Sky (which was initially on the band’s first EP and later included here) is more reminiscent of old Slayer, but with a lot of melodic elements added.

"Just listen to Hansen's high scream at the beginning and try not to get goose bumps. His vocals are a lot harsher than Kiske's, but his tonal characteristics and high pitched screams can already be heard here in all its glory."

Notable tracks: Ride The Sky, Starlight, Guardians, Victim of Fate and How Many Tears.

"Finnish guitarist and composer Timo Tolkki had been doing his thing with Stratovarius for a few years. The band had already put out amazing records such as Fourth Dimension and Dreamspace up to this point.

"However, it feels to me like that band really reached their true potential on this record.

"This is also the first with the “classic” line-up, which included former Yngwie Malmsteen keyboard player Jens Johansson and former Rage, Grave Digger and Running Wild drummer Jörg Michael in addition to the vocalist Timo Kotipelto and bassist Jari Kainulainen.

"The power metal genre is taken to a new level by adding Rainbow and Yngwie Malmsteen influences to a sound that was, at that point, already 10 years old.

"Tolkki admittedly was very influenced by the "Keeper" sound, as were all of us, but he did his own take on it, and this resulted in one of my favourite albums of all time."

"This was the first power metal record I ever heard, and it was a moment I’ll never forget.

"Carry On hit my tiny 9 year old ears at an amusement park, and that chorus never left my mind.

"André Matos (RIP) was and will forever remain one of the most gifted musicians to ever walk the earth, not to mention that this was the introduction of Kiko Loureiro (Megadeth) to the world.

"Here the band takes a heavy dose of Helloween influence and does its own thing with it, much like other bands did in the 90s.

"A lot of classical passages and even Brazilian folk influences such as in “Never Understand” can be heard, a concept that the band took a step further with their subsequent release, Holy Land."

"Taking on a darker, more thrash-y sound from the get go, Blind Guardian has reigned supreme in the more "epic" realms of power metal since the band's inception. But here they have truly found their identity.

"The melodies aren't quite as happy as the other albums on this list, and the instrumentation is a lot heavier at times. Just listen to the opening guitar riffs of Time What is Time.

"This isn't a concept album, the lyrics are based on different books and video games. The Quest For Tanelorn, for instance, is based on Michael Moorcock's Multiverse series - it takes me to some other dimension every time I listen to it, even to this day.

"Of course, the band's single biggest hit, The Bard's Song - In The Forest (NOT based on JRR Tolkien, by the way) can also be found in this record.

"This is a different flavour of power metal, one that's darker, more lush and epic. Another example of doing your own thing with a sound that already existed."

Notable Tracks: The Bard's Song - In The Forest, The Quest For Tanelorn, Time What is Time and Theatre of Pain.

"Kai Hansen left Helloween in 1989 and took his sound with him. He was initially joined by current Primal Fear singer, Ralf Scheepers and recorded three great records, including Insanity And Genius.

"Here, however, he took up the lead vocals once again, as he had previously done in Helloween's debut album, and his voice sounds beautifully unique.

"To me, if there ever was a continuation to the Keeper albums, it would've been this. The perfect, melodic choruses are there, so are the same types of arrangements and composition.

"Man on a Mission is impossibly catchy and melodic and remains to this day as one of my favourite power metal songs of all time."

Notable Tracks: Rebellion In Dreamland, Man on a Mission, Land of the Free, Farewell.

Blind Guardian – Imaginations from the Other Side (1995)

"Improving upon the epic-ness that was Somewhere Far Beyond, Blind Guardian decided to take it a step further with this record.

"It's even heavier than its predecessor and definitely more melodic.

"Lyrically, the band found itself once again taking influences from fantasy stories and books such as The Lord of The Rings, The Wizard of Oz and even Arthurian Legend.

"This is quite often a fan favourite record and it remains an absolute power metal classic. It also features another big hit by the band, Bright Eyes."

Notable Tracks: Imaginations From The Other Side, The Script for My Requiem, Bright Eyes.

"If Angels Cry was an amazing power metal debut, in Holy Land Angra definitely found the sound for which they'd be known for, for years to come.

"A LOT of Brazilian folk influences, as well as classical music can be found here mixed with the traditional power metal they had already established with the former album.

Lyrically, it is a concept record about the discovery of Brazil. The solo guitar riff from Nothing To Say remains one of my favourite moments ever recorded in music.

"Matos' compositional style shines through every song, as he takes the listener through the history of Brazil as told by the natives.

"The title track will make you feel like you're on an island surrounded by native Indians watching the Portuguese invade their land in the 16th century.

"Power metal choruses intertwined with slower, percussive heavy passages which often lead to an orchestration or a faster part - make this record one of the finest examples of amazing compositional skills in power metal.

"One of those records that makes me proud of being born in Brazil."

"Improving on the style they created with Episode, Stratovarius took their neoclassical power metal to the next level with this album.

"From the harpsichord intro in Black Diamond to the epic ending in the title track, this record is one of the best things ever done in music, if you ask me.

"Lyrically, it is a concept album about Nostradamus, but done 11 years before Judas Priest even thought about it. The lead guitar and keyboard work is fantastic, and a huge influence on my own music.

"To me, every track is a stand out... it's really hard to pick one moment, as I spent a lot of time listening to this record in high school. Kotipelto's vocal performance is stellar in this."

"When everybody else was taking their own spin on power metal, HammerFall decided to put out a record that went back to its roots.

"This is a much more traditional approach, which even included a cover of Warlord’s Child of The Damned (off the aforementioned Deliver Us EP from 1983).

"The opening of The Dragon Lies Bleeding got me hooked right away when I bought this record in 8th grade.

"Joacin Cans' vocals aren't quite as up in the stratosphere like everybody else’s were at the time, and the lead guitar work favours catchy melodies instead of technical, neoclassical playing.

"The general sound is a lot more reminiscent of 80s bands than it is of 90s power metal itself. If Blind Guardian took epic-ness to the maximum, HammerFall chose to go the other direction and stick more to their roots.

"Lyrically, though, the battles and epic-ness are still there. It's just a different take on it. Just listen to the title track, a gorgeous ballad that will make you feel like you've just been victorious in the battle field."

"Orchestrations were not so common place in power metal by the mid-90s.

"While bands such as Angra and Blind Guardian had certainly used it quite a bit of it at that point, I feel that Legendary Tales was the first time a power metal record was successfully conceived to be like a movie soundtrack.

"I even remember reading an interview with Luca Turilli back in 8th grade where he called the band's genre "Hollywood Metal", and he was right.

"It's almost impossible to listen to anything off this record and NOT think that you're watching some epic-medieval fantasy. Every power metal cliché you hear nowadays in the bands trying to be "epic" come from this record, if you ask me.

"They were obviously very influenced by Blind Guardian and Manowar, but they did their own take of it, and created a record that's very dear to my heart to this day.

"Fabio Lione's voice, in my opinion, is the best it's ever been on this album. It's also hard to pick any stand out tracks because the entire album seems to work together in a flow."

Notable Tracks: Rage of the Winter, Land of Immortals, Warrior of Ice

Northtale’s debut album Welcome to Paradise is out now via Nuclear Blast. Available to purchase physically and digitally here.