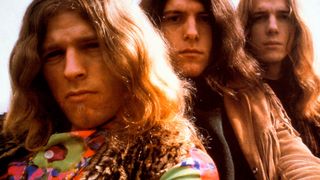 Nobody’s saying Sabbath didn’t invent metal, man. They did. Technically, the machine that chopped off the top of Iommi’s finger invented heavy metal, but let’s just credit Birmingham’s finest mope-wizards and be done with it. But that doesn’t mean there weren’t plenty of other long-haired freaks going bananas on their instruments in the late 1960’s, blowing amps and minds with screaming and bleating and caveman thumping and walls of psychotic fuzz. There were armies of these proto-metal teenage noiseniks out there with fire and steel names like Pentagram, Warhorse, Night Sun, Hard Stuff, Bedemon, Tear Gas, Atomic Rooster and Iron Claw all hooked on speed and Satan, huffing napalm and sinking slowly into their couches of woe with Iron Butterfly blaring endlessly on their headphones.

Some crawled out of the basement and released classic albums. Some died quietly, gurgling on their own blood with the fumes of Altamont in their nostrils. Sabbath were the heaviest of ‘em all, but they sure as fuck weren’t the only hard rockers running amuck in the age of Aquarius.

Holden is probably most well-known as one of the guitarists on Blue Cheer’s ironically title New! Improved! album from 1969. Cheer’s original guitarist Leigh Stephens started to go deaf (well, sure) in ‘68 and quit the band, who recruited Holden from LA psych outfit The Other Half. The result was a disappointing turn towards the commercial, steering a hard left away from the crunching death-blues of the first couple records. Holden didn’t dig it and split to sow seeds elsewhere.

Soon after, he teamed up the doom-rock architects Sunn amps and drummer Chris Lockheed to create the long-lost Population II album, a festering, bruising, towering ode to the excess-is-best ethos. He went bankrupt making it and it never even got released at all until it showed up in bootleg form years later, but if things had gone Holden’s way and if the album was released on schedule, it would have beaten Sab’s first album by a few months. In essence, it really is the world’s first metal record. And it’s heavy as fuck.

While we’re at it, there’s no way to have a discussion about metal’s big bang without discussing this album. It was, by far, the heaviest record of 1968. Heavy rock had only existed as a concept since ‘67 and along with Vanilla Fudge, Blue Cheer were one of the very first pioneers of the stuff. Looking back, it’s more grunge than metal but let’s give credit where it’s due: Blue Cheer were the loudest, heaviest, hardest band in the world when they released this record. It’s still a powerful, bruising testament to free-flowing testosterone and the dark side of hippie generation.

The term “heavy metal” did not really exist as a genre tag in 1968, but it certainly existed as a concept, and Brooklyn’s Sir Lord Baltimore was entirely on board. Simply stated, they wanted to be the fastest and heaviest band in New York City, and they were. Their 1970 debut Kingdom Come is so ruthlessly aggressive it sounds like the work of crazy people, of feral lunatic savages. Creem magazine famously called the whole ear-battering affair “heavy metal” in their review. They were right. It’s not even 1970 bloozy sorta-metal, it’s just straight-up, rip your face off ferocity.

Formed from the ashes of British acid-blues band Black Cat Bones (the other half of BCB formed Free), Leafhound’s tantalising cocktail of drugs and distortion was so ahead of it’s time that their sole album (for 40 or so years, at least), Growers of Mushroom, still sounds like it was released yesterday. It’s also the blueprint for every “stoner rock” album of all time ever.

They never really escaped their Kansas City basement in the early 70’s and it wasn’t until the 1990’s until anybody even heard their alarming early recordings, but JPT Scare band was essentially the Cannibal Corpse of their day, the most extreme example of all-knobs-to-the-right heavy rock’n’roll that 1973 could muster. Blistering and sorta terrifying, even today. They were called the Scare Band for a reason, man.

Extremely rocky group dynamics and jarring stylistic shifts ultimately doomed Captain Beyond, but on their ‘72 debut, the sorta-supergroup (Deep Purple frontman Rod Evans, two members of Iron Butterfly) exploded onto the scene with an album that was gorgeously heavy and massive in scope. Opener Dancing Madly Backwards (On a Sea of Air) is still one of the greatest epic metal songs of all time.

One of the first American rock bands to openly worship and emulate Black Sabbath, Bang are, in fact, American doom pioneers, and their first album is a stone-cold classic of ugly distortion and steely-eyed downer rock. There have been many American Black Sabbath’s since Bang, but they were the first. And still the best.

Keyboards aren’t metal and Atomic Rooster was formed by a keyboard player but this one gets by on tone and ferocity. An offshoot of the Crazy World of Arthur Brown, Atomic Rooster mixed prog with furious riffs and thunderous drum beats and this, their second album, was their finest moment.

Sonically and thematically similar to neighbours Sir Lord Baltimore, Dust was a Noo Yawk band with Noo Yawk attitude and their much sought-after albums were minor miracles of prehistoric heaviness. Featuring one Marc “Marky Ramone” Bell on drums, Dust nailed the whole Vikings/murder/nihilistic depression vibe decades before the Swedes.

Jesus christ, why’d a band so heavy name themselves after a fucking parakeet? Who knows but this Welsh band are the underreported heroes of NWOBHM, a power trio with the emphasis on power who played music that was fast and heavy and savage back when most bands were blowing flutes and strumming mandolins. If this record sounds familiar at first listen, it’s because most of it has been covered at some point by acolytes like Metallica and Soundgarden.