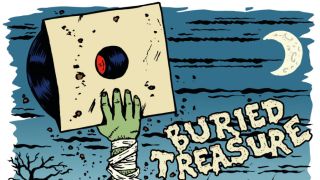 Randy Holden is perhaps best remembered for his brief stint in Blue Cheer. However, it’s this monstrously heavy blues-driven proto-metal bomb that’s a holy grail for collectors. Understandably so, as Population II makes Blue Cheer (often described as the heaviest band of the 60s) sound light in comparison.

The band consisted of Holden on guitar/vocals/bass and Chris Lockheed on drums. The relentless dirge and excessive volume of Holden make this album more of a showcase for his six‑string heroics than a timeless exercise in classic songwriting, and these are both its strong and its weak points.

What the songs have in heaviness, they lack in dynamics. Brooding and doomy tracks populate most of the journey, with plodding drums holding back potential moments of excitement.

However, if it’s bombast you’re after you’re in for a treat. Starting with the six-minute Guitar Song, it’s clear Holden should have gained much higher status as a true axe lord.

The bone-crunching rendition of Blue Cheer’s Fruit & Iceburgs is a highlight, while Between Time has a chorus that sounds like Sabbath covering Jumpin’ Jack Flash. Ten-minute closer Keeper Of My Flame twists, churns and grinds, and has some seriously tasty acid soloing.

This album is a must for all enthusiasts of early metal. Immediately withdrawn upon release, virtually all known copies have a deletion drill hole through the sleeve and labels.