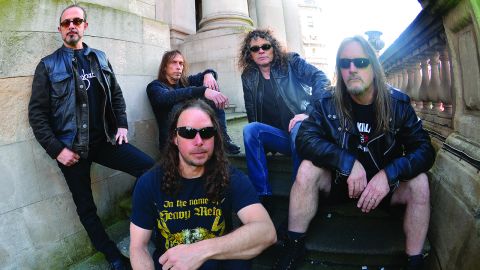 Any fan’s heart craves more than an eight-song disc dominated by demos and remixes, even though it’s nice to hear rare track Killogy and a cover of Johnny Cash’s Man In Black. Still, if you’re new to this era of one of the world’s finest metal bands, a shitload of fun awaits: seven studio records, two live, one best-of and a covers collection. What these albums may occasionally lack in song-by-song consistency compared to Overkill’s previous work for Atlantic Records, they make up for with sheer, independent bare-bones fire in the wake of their split with the major label.

1996’s crushing and vital The Killing Kind is one of the band’s best works, followed by the similarly powerful From The Underground And Below and Necroshine. Although a rare complacency takes hold at the turn of the millennium with Bloodletting, 2003’s Killbox 13 heralds a return to form, including one of Overkill’s all-time greatest tracks, Unholy.

By the time we reach this set’s final studio epic, 2007’s Immortalis, the band are truly firing on all cylinders. As an Overkill document, this is one mighty slab of middle-finger metal.