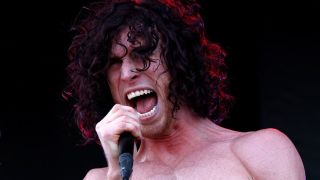 If there’s one thing that sets Nothing More apart, it’s their penchant for experimentation. Their live performances often see frontman Jonny Hawkins and bassist Daniel Oliver rigging up a one-man-band contraption involving a bass and half a drum kit, while Jonny powers through at least three different vocal styles in one song.

It wasn’t until the release of their self-titled album in 2013 – their first on Eleven Seven Music – that Nothing More really began to gain attention. The lead single This Is The Time (Ballast) reached number two on the Billboard Mainstream Rock chart. And, as the band begin to wrap up work on their sixth full-length release, we sat down with Jonny to discover the 10 albums which changed his life…

“The reason this Dredg record is life-changing for me is because it’s a concept album about sleep paralysis. I grew up in a very religious household so I had a certain lens that I viewed the world through that I inherited from my parents. My mom always told me this frightening story of her as a child having this demon encounter, which of course now as an adult who loves science I don’t adhere to. But later I came to find out it was sleep paralysis she was dealing with, and I deal with the same thing where I wake up in the middle of the night and I’m not able to move my body. My mind would project this big black blob hovering above my body and I did some research and it turns out a lot of people have it, and I learnt about it through that record. Then I was no longer scared of it; was actually kind of fun when it happened I didn’t think it was a demon attacking me any longer.”

“This is kind of an oddball for most of the music I listen to, but it’s one of those records that really opened me up to how important personality is. Ben Folds has a very conversational lyrical approach, and that’s influenced our lyrics very much. He uses people’s personal names and is very descriptive. He has this one song about breaking up and he’s like, ‘the bitch went nuts, she stabbed my basketball!’ It’s just funny lyrics like that that make you feel like you know him well.”

“This one’s kind of an oddball too. It really influenced the electronic side of our music; there’s something about all the layers and texture she puts into her songs. It’s really cool music to fall asleep to because it puts me in this dreamland, and no other music really does this to me. I’m hoping to collaborate with her on our next record – if you know anybody, let me know!”

“Karnivool have been one of my favourite bands for a long time. We got to tour with them, and they single-handedly influenced us more than any other band.”

“This Mars Volta album was a turning point for me in high school. My brain didn’t know how to compute it. But it kind of cracked the egg open for me creatively.”

“This Tool album is self-explanatory, it’s just an awesome record.”

“This one Rage Against The Machine album has really influenced our aggressive side. I always liked hip-hop as a kid growing up, even though I listened more to rock and played rock, but this was the first time I saw this beautiful cross between the two that I’d never really heard before.”

“This record was just amazing. On our new album, we wrote two songs with the guitarist in Sevendust, his name’s Clint [Lowery], and he’s an awesome dude, a great musician and a good person. They’re two songs that haven’t been released yet, a song called Funny Little Creatures and one called Tunnels.”

“I actually went to high school with This Will Destroy You’s guitarist, and I had no idea. I’d been listening to this band over the course of a year or two, and I heard the name of one of the guys in the band and I was like, ‘wait a minute, I went to high school with this guy!’ It’s the only instrumental record I’ve ever wept to. I don’t really listen to instrumental music, so that’s something for me to say. I need more of a story and lyrics to draw me in, but this is just unbelievably powerful.”

“The Alchemy Index by Thrice is like four mini-albums. That one opened my mind up to how wide of a spectrum one artist could cover, and still somehow keep me involved in it.”

Nothing More are on tour now.