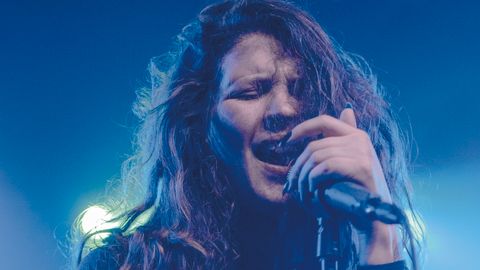 There’s a weird feeling in the air tonight. What should be a celebration of one of contemporary music’s most intelligent and revolutionary bands is tinged with a sense of sadness as this could be the last time we will ever see tonight’s headliners onstage. Warming up the funeral crowd are Switzerland’s COILGUNS [8], who are pumped with so much adrenaline that their skin might burst at the seams. Frontman Louis Jucker hurls himself into the crowd, climbing on the sound desk and running amok amidst a head-wrecking orchestra of erratic hardcore. There’s a change of pace for Mathieu Vandekerckhove, aka SYNDROME [6], who brings a taste of Amenra to proceedings with bleak post-metal, created with just one guitar and a loop pedal. Unfortunately, his mic problems drastically remove you from the world he’s trying to create. It’s interesting that OATHBREAKER’s [9] sound is as much an amalgam of the two previous bands as they are their own entity. Basing tonight around their landmark Rheia album, Caro Tanghe tears out her heart and lays it out, still beating and broken, for all to see. Emotionally draining yet wholly captivating, outside of the few pitters down front, Scala stands as one silent body, enraptured in tales of terror and torment. From the ethereal to the barbaric, no other beast sounds like Oathbreaker, and we can only hope they return to roar again.