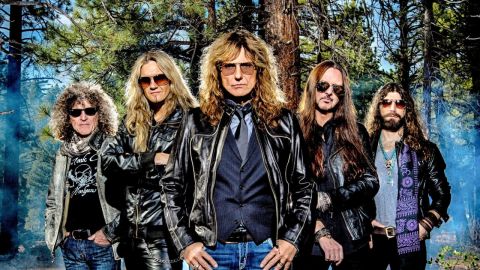 There can be only four reasons why David Coverdale thought that re-recording classic Deep Purple songs from the MK III and IV eras and passing them off as the new Whitesnake album was a good idea.

They are: 1) He’s on drugs. 2) The alimony payments have gone up. 3) A terrorist group have kidnapped his poodles and he needs the ransom money. 4) He genuinely thinks this is a fitting tribute to fallen comrades and old friends.

Let’s give him the benefit of the doubt and rule out numbers 1 and 2. And while the hardest-hearted cynic can surely find it deep within themself to forgive him in the event of a group of rogue dog-bandits, it’s a fairly unlikely scenario. That leaves us with reason No.4, which is the most alarming and disrespectful of all. Because The Purple Album is a stinker.

On paper the idea of The Cov revisiting his Purple past looks like one massive brain-fart. The reality is worse: 13 songs that were perfectly fine in their original, unmolested state, given a ham-fisted ‘modern’ re-upholstering that make Whitesnake’s sterile, Steve Vai-assisted remake of their own Fool For Your Lovin’ sound like a garage-punk masterpiece.

There are points where someone – God knows who – attempts to replicate Glenn Hughes’s backing vocals. And that’s the problem right there. These tunes were originally recorded by Blackmore (and Bolin), Hughes, Paice and Lord. These new versions feature the drummer from Slip Of The Tongue, a bloke from Winger and, for all we know, Ken Barlow and King Zog of Albania. It’s like remaking Morecambe & Wise without Eric Morecambe. Or Ernie Wise, for that matter.

Let’s be clear here. Whitesnake are one of the great British bands of the past 40 years, and Coverdale is one of the finest blue-eyed soul singers, full-stop (even if his voice during recent live shows was less Chateau Latour 1949 more Blue Nun 2008).

But this wrong-headed travesty of an album won’t just have Jon Lord spinning in his grave, it’ll have Ritchie Blackmore making like a Catherine Wheel too. Sure, he’s not dead yet. But one listen to this might just finish him off./o:p