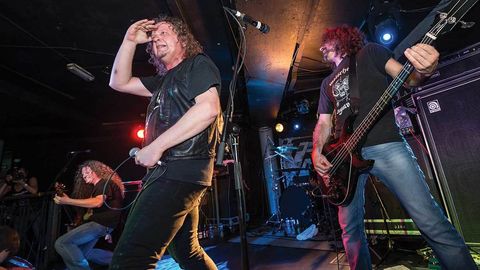 Since re-energising almost 10 years ago, Voivod have made regular trips from their native Canada to Europe, primarily at festivals or second on the bill. It was only in November 2016 when they last graced Camden’s Underworld. Then it was as support to Swedish death metallers Entombed AD. Tonight they headline to a deeply partisan, passionate and much proggier crowd.

The cardiac monitor beep of the intro tape provides signs of life. Finally a robotic voice proclaims, “We are connected,” and Killing Technology’s thrashing sci-fi rage takes over. Drummer Michel ‘Away’ Langevin’s distinctive tom hits announce his presence. He’s barely visible at the rear of the stage, leaving guitarist Daniel ‘Chewy’ Mongrain and new bassist Dominique ‘Rocky’ Laroche to provide the visual entertainment. They scurry across the stage like medicated lab rats around the focal point of frontman Denis ‘Snake’ Bélanger.

Post Society, the title track of their latest EP, links the 2017 incarnation with the classic line-up. From its punk bassline to those famously intricate and dissonant guitar chords, this is simultaneously contemporary and like a lost track from 1987. When your music sounds like the tribal rites of a future civilisation, it’s difficult to place a date on the songs, even when recorded 30 years apart. They seem to live in a quantum state. We are connected indeed.

The classic Dimension Hatröss album is represented by Psychic Vacuum, a serpentine kaleidoscope of frenetic time changes and off-footing lurches from hardcore punk to Crimson-esque avant-gardism. With songs like this, these Canadians were never going to be a band with mass appeal, but they’re being met with cultish fervour from a half-full Underworld.

The less celebrated early-90s period is given the nod with two selections. The Rush-like The Prow is greeted as a singalong hit. Perhaps the most straightforward song tonight, it begs the question why more of its parent Angel Rat album isn’t played live. The Lost Machine is Rush’s Hemispheres condensed into six minutes, and is as jaw-dropping as that sounds.

Chants of “Piggy! Piggy!” spontaneously break out at intervals throughout the set to commemorate Denis D’Amour, the original guitarist who passed away in 2005. His presence still looms large over the band and the new mini-epic We Are Connected could easily have been a Piggy composition, so respectful is Mongrain of his forebear. During Voivod he falls backwards onto Snake’s vocal monitor, playing all the time in Nigel Tufnel mode. Like Spinal Tap, these guys don’t take themselves too seriously.

From its pulsing tremolo intro to its elegiac finale, a cover of Pink Floyd’s Astronomy Domine provides the perfect encore.

Despite the small turnout for this show, it’s clear that this band are worshipped. It’s gigs like this that show why.