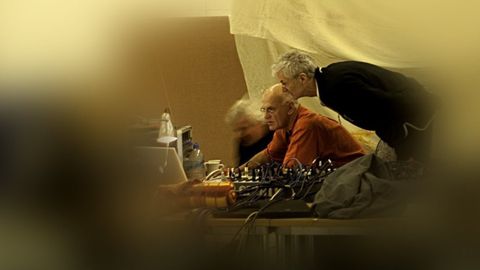 “I don’t honestly know what kind of music this is,” writes Peter Hammill in the press blurb that accompanies Alt. “But I do know it’s got a strange compulsive power.” One thing’s for certain. Anyone expecting a companion piece to 2011’s terrific A Grounding In Numbers, Van der Graaf’s third studio LP since reconvening in 2004, will find their hopes dashed. Instead, this an all-instrumental album of improvs and experiments recorded at various soundchecks and sessions. Even Hammill’s declaration that this is music from the weirder end of their own scale should give you an idea that Alt really isn’t a record with verses, middles and tidy ends.

That’s not to say there’s no structural logic, however loose. It begins with Earlybird, little more than a dawn chorus of birdsong, and ends with Dronus, all chilly atmospherics and sleepy rhythms. A day in the life, perhaps. So what of it?

The overriding impression of Alt is of a band who are not quite the super-intense figures that proggish legend would have us believe. There’s a playful side to this music that feels far removed from Hammill’s more austere solo excursions into wordless soundscapes. And even Van der Graaf’s most obvious antecedent to all this, the latter half of 2005’s Present, doesn’t have the same sense of laissez-faire.

It’s a feature that follows through to the songtitles themselves. Some sound like they’ve been cribbed from Eno’s Oblique Strategies cards while he wasn’t looking: Batty Loop, Here’s One I Made Earlier, Tuesday The Riff. Or my own personal favourite, Mackerel Ate Them. But for an album that deliberately presents itself as a weirdy’s paradise, Alt is surprisingly accessible. Never mind that much of Guy Evans’ drumming patterns came about while he was fiddling about with his bass pedal, his jazzy percussion is one of the album’s defining moods. Be it backing his bandmates’ skronkier urges (the synthetic farts and gurgles of Mackerel Ate Them) or laying down the smoother tempo of tunes like Sackbutt, which carries pleasingly squeaky traces of German legends Harmonia.

Hugh Banton’s organ fills veer from the oblique to the plain mad. Colossus sounds like a lost soundtrack to some post-war European arthouse film, while Splendid is a fantastically explosive piece whereby Banton bashes the Hammond like a wild-eyed Brian Auger.

Above all it’s an album that is what it is – three blokes of a certain vintage with nothing left to prove and a curiosity for the elastic possibilities of sound that remains undimmed. More power to them, I say. Even if they don’t know what kind of music it is.