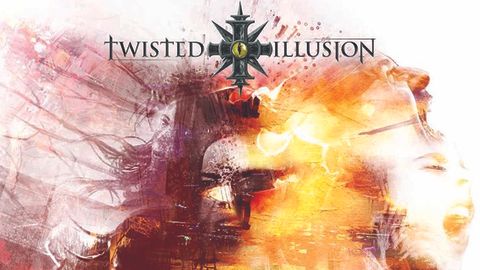 Twisted Illusion are certainly a fearless bunch. Tasked with concocting a follow-up to their well-received debut – 2016’s Temple Of Artifice – this Manchester-based act have crafted an album that has been bravely stretched over two discs. Centred around vocalist/guitarist Matt Jones, their line-up has been far from steady, with a variety of members performing on stage and in the studio as needed. That combination of a lack of stability and the sheer mountain of music created here has not been a winning one, unfortunately. Musically, they seem determined to hop on to the ever-burgeoning prog bandwagon, when in reality, there’s a glaring dichotomy to that claim. The first half of the album harks back to the New Wave Of British Heavy Metal, with opener Reflections having the aura of Saxon or even Judas Priest, with little in the way of inventiveness to elevate it above the predictable. Granted, there’s nothing wrong with the musicianship here, but padding out tracks with imitation Bruce Dickinson screaming quickly grates. Luckily there’s a flipside, as the 28-minute title track and the expansive Discovery that fill disc two show a vast amount of promise.