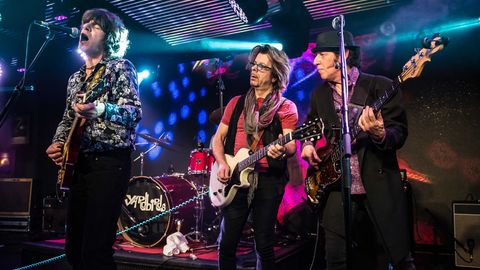 None of the Holy Trinity are here. Eric Clapton, Jeff Beck, Jimmy Page. Despite persistent rumours, at least one misleading ticket advert, and the hopes of many in the crowded venue, the iconic guitarists upon whom much of The Yardbirds’ reputation is built are all absent. And it’s a good thing, because guest appearances would have inevitably overshadowed a quite brilliant performance.

The current incarnation are a joy. They revel in the achievements of the band in their heyday, embracing all aspects of a varied career, from blues to pop to psychedelia. And it’s a riveting, revelatory 90 minutes, proving that nostalgia can indeed feel contemporary.

Watched by a satisfyingly mixed crowd – spanning three generations, from the 60’s diehards to those who are curious about the legend – The Yardbirds sprint through all the songs you want to hear. I’m Not Talking leads into the familiar territory of Heart Full Of Soul, while Mr. You’re A Better Man Than I and I Ain’t Got You allow the current line-up to show they’re tight enough to be well rehearsed, yet sufficiently loose to capture the spirit of the tunes.

During Little Games, though, the band truly blossom. It’s a rhythmic tour de force, as veteran drummer Jim McCarty (the only member left from the 60’s glory years), bassist Kenny Aaronson and percussionist Billy Boy Miskimmin combine in an effortless jamming percolation. This is an astounding highlight which leads into Shapes Of Things. Miskimmin then displays his versatility on the mouth harp during a virtuoso interlude in New York City Blues, dovetailing with some charismatic chops from the accompanying Aaronson.

McCarty, now 72 but playing with an intensity that would leave many half his age breathless, takes over on lead vocals for Back Where I Started, which is a nod to his 80’s band Box Of Frogs (one with strong Yardbirds connections), before the jostling Over Under Sideways Down signals a surge towards the climax.

The evergreen Smokestack Lightning provides the springboard for the chugging Train Kept-A-Rollin’, while the haunting beauty of Still I’m Sad and Lost Woman offer a tonal majesty, with John Idan’s vocals, impressive all night, bringing out the depth of both songs. By this juncture, Chris Dreja — the band’s original rhythm guitarist, who had been watching from the side of the stage — has departed, ironically just as he’s given a name check from stage. But this is the only time on the night that The Yardbirds get their timing wrong. They wrap up the main set with the triple treat of For Your Love, Happenings Ten Years Time Ago and Dazed And Confused; the last named might be associated with Zeppelin, but its stature began with The Yardbirds, and is an appropriately climactic conclusion, cementing as it does how, in 1967, this band helped to shape the next generation of great rock music. Mind you, it should be pointed out that McCarty precedes For Your Love by announcing that their biggest hit will introduce a medley from the band’s psychedelic phase, but we get all three songs in full, which exactly how it should be. Hardly a medley, more a trio of tunes played with no break!

For the encore, the band return to the blues for Good Morning Little Schoolgirl, which was the stand out track on the seminal 1964 album Five Live Yardbirds, and the closing I’m A Man. Leaving the stage to an ecstatic reaction, The Yardbirds of 2016 leave nobody in any doubt they are the real deal, and not trading off The Holy Trinity.