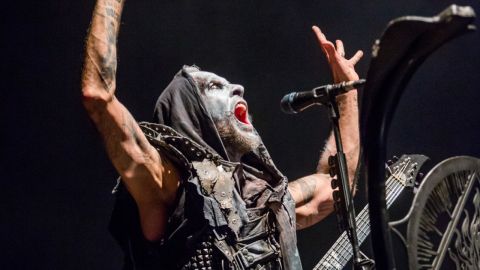 In the sleepy Slovenian town of Tolmin, once a year, you’ll find the annual Metaldays festival. It’s one hell of an event, adored as much for its activities, scenery and own private beach as it is the bands. Over the five days there was still some stunning performances and here are our top five.

**Devin Townsend **Such is the ever-increasing popularity of all things Hevy Devy here in the UK, it’s quite a treat to see the big man himself wander out onto the main stage at a fairly modest hour on Metaldays’ opening Monday. If it’s baffling to us then Devin himself takes it all in his stride, wandering on in a full suit despite the sweltering conditions and treating those in attendance to a more stripped down set than we saw at his Retinal Circus or recent Ziltoid extravaganzas. This is simply a four-piece band led by a one of the most charismatic and unique frontmen in heavy music, with a back catalogue of wilfully odd and unusual songs in their cannon.

And while the magnificent likes of opener Rejoice, the brutal bastard bounce of Supercrush! or the ethereal majesty of set closer Kingdom all showcase what a tremendous musician Townsend is, it’s his between song patter that makes him out as a true individual. Class personified as ever.

**Skindred **Big shock, eh? No, probably not. Such is the level of consistency in Skindred’s live shows to decimate any stage they are within spitting distance of, this was always going to be a no-brainer. Although there are concerns before they hit the stage as, due to their astonishingly early placing on the bill (and the festival goers’ tendency to only turn up for bands once they’ve finished enjoying the nearby beach), there are not enough people to fill a shoebox as little as three minutes before they take to the stage.

Of course as soon as their death march intro booms out the PA, folks come running from all angles and we’re once again in familiar territory; Benji Webbe’s glorious command of the audience, retina burning stage get-up, Mikey Demus peeling off endless meaty riffs underscored by Dan Pugsley and Arya Goggin’s iron clamped tight rhythm section, plus DJ Dan Sturgess throwing in everything from The Prodigy to Mackelmore into the ‘Dred sound system. It’s as close to a party that Metaldays gets away from the beach. A closing Warning, complete with the ‘Tolmin Helicopter’, seals the deal in triumphant fashion. Why aren’t they higher on the bill?

**Sepultura **Sometimes it’s takes a little bit of reflection on your past to shape your future, and, as they celebrate their 30th year as a band, Sepultura pull out all of the stops, against all odds, to play one of the sets of the weekend.

Sure it helps that they have material from legitimate classic metal albums like Chaos A.D., Beneath The Remains and Roots to draw from, and draw from them they do, but it’s actually heartening to hear them mix stone cold anthems like Dead Embryonic Cells and Territory with the Derek Green era likes of Choke and not see a dip in the enthusiasm or quality. And, with only an hour onstage, it’s a wise move to cram as much into the set as they possibly can, ending with the triple hammer blow of Refuse/Resist, Ratamahatta and Roots Bloody Roots is something most bands can only dream of.

**Suicide Silence **It’s no great exaggeration to say that Suicide Silence are feeling competitive today. Placed on a bill alongside friends, influences and peers like Behemoth, The Black Dahlia Murder and Carnifex they have the bit between their teeth as they stomp onstage and pummel the hell out of Metaldays. New(ish) vocalist Eddie Hermida not only has a jaw-dropping vocal range, but is in rabble rousing form, inciting circle pits, walls of death, instructing the onlookers on the bank to get involved and giving an impassioned speech about his band’s place on the bill. “People say we don’t belong here,” he begins. “But we are just as much a part of this scene as any band here this week!”

Frankly if you can’t see the charms in an utterly savage Wake Up, a taut scattergun performance of Inherit The Crown, Cease To Exist’s tantalising dynamism or just the sheer fucking carnage of the closing You Only Live Once then your ears, eyes, brain and heart must be fucked beyond medical hope.

Behemoth Looks like Metaldays saved the best for last. Despite all of the excellent performances mentioned here (plus others from Unearth, The Black Dahlia Murder, Carcass, Cannibal Corpse, Betraying The Martyrs and Arch Enemy), all fans will remember about this weekend will surely be the sight of Nergal and co. in full flow. There are bands, there are great bands, there are great live bands and then there is what we have tonight; a band in the form of their career.

From the opening march of Blow Your Trumpets Gabriel to the firebombs and bloodcurdling chant of O Father O Satan O Sun,not a second is wasted either musically or in terms of spectacle. Nergal is an engaging and powerful frontman, and Behemoth’s music manages to convey, not just power and brutality but, a sense of their leader’s inner psyche. Any band can be sonically heavy or use endless fireworks and stage props, but not many can do so whilst peeling back the layers of flesh for you to gasp at the black and beating heart. The fact Behemoth do it in such a uniquely thrilling way is testament to just how special a band they are.