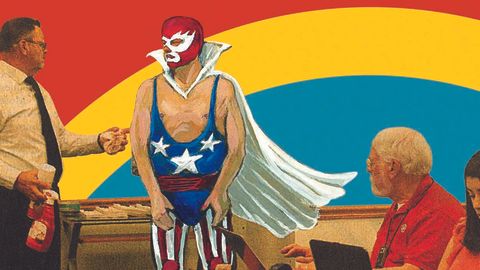 Instrumental bands can often find themselves looking at the empty spot behind the microphone and figure that they need to manufacture a sombre intensity to offset the absence of a singer.

No such concerns for The Evil Usses, whose second album, produced by Deerhoof’s John Dieterich, is both playful and exuberant, like Zappa at his least annoying or Renaldo And The Loaf at their most accessible. Lorenzo Prati’s honking sax and burbling synths weave in and out of a latticework of joyous riffs of unequal length, using that Beefheartian trick where the riffs suddenly meet up as arranged before springing off in a new direction. Gambino, whose video features the band leaping about in multicoloured boiler suits like excitable jumping beans, is a highlight, with an Oriental pentatonic figure underpinned by bludgeoning bass and drums from Leon Boydon and Daniel Truen respectively. Pre-Op Pop evokes memories of the countdown to British For Schools And Colleges programmes in the 1980s, Conrad Singh’s soaring guitar line almost singalong, but not quite, thanks to some adorable feints and dummy runs. The overall effect is delightful and makes you want to punch the air. Maybe twice.