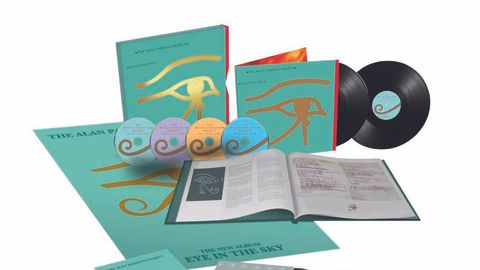 The argument as to where the dividing line lies between what might be pigeonholed as progressive or pop can occupy lots of time and energy, often causing grown men to weep. Just ask Prog’s long-suffering editor. Worrying about such distinctions is probably not something that troubled The Alan Parsons Project.

Their sixth album, released in 1982, positively revels in an unfettered, poppish pomp with its mix of uncluttered tonality, hooks and impeccable, frequently opulent production. Remaining largely fresh and undated, the half-speed mastered vinyl copy and a Blu-ray 2017 surround sound mix, both of which are as impressive as you’d imagine, provide the main reason for grabbing this set, although the supporting items exert a significant charm.

A whole disc of Eric Woolfson’s piano demos provides an insight into an artist at work. Unable to write or read music, he would fill up cassette tapes as he worked at home on the different permutations and arrangements of the material. Inevitably there’s a degree of repetition but in some respects, the most lo-fi disc provides this collection’s most intimate moment. Away from Parsons’ legendary studio gloss, we are at the stripped-back source and it’s a curiously poignant experience that places the listener right next to Woolfson there at the piano. At one point the telephone rings and,

like him, we are jolted out of the composer’s reveries. His daughter Sally observes that for her and sister, Lorna, who compiled the tracks from boxes of unmarked tapes, these cassettes form the soundtrack to their childhood, noting “we were often in the room next door and would hear him writing songs and playing like this all the time”.

Arriving at a finished album doesn’t necessarily involve a grand plan. It’s an intuitive process that goes through several stages as performers and producers sift and grade the elements before them. From this remove, the rationale behind some choices can seem elusive, with Parsons admitting he can’t recall why they added air-raid sirens to Psychobabble other than it just worked. Another disc of previously unreleased material finds the team in Abbey Road. The subtle details of the finished sound are revealed through alternatives or early mixes. Thus we hear isolated tracks, abandoned Beach Boys-style backing vocals on Old And Wise; Parson’s own guide vocal for You’re Gonna Get Your Fingers Burned, which, to these ears, remains the best song Elton John never recorded. Not everything collected here feels essential but it does offer access to Woolfson and Parsons’ approach and thinking regarding what was a commercially successful formula.