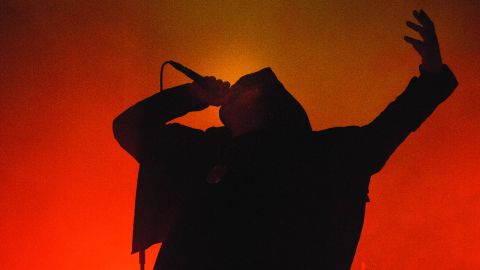 When Greg Anderson and Stephen O’Malley first brought Sunn O))) to the UK 15 years ago, footing a bill topped by Orange Goblin, the London date saw the duo skulking around for 20 minutes behind a towering henge of amps.

That the group are tonight appearing as part of the David Byrne (of seminal 70s post-punk/new wave troupe Talking Heads) curated Meltdown festival inside the post-war concrete opulence of the Royal Festival Hall is, then, not merely a remarkable achievement for the band themselves but is also testament to the popularity and the credibility now afforded to experimental, avant-leaning metal music.

Before a note has even been struck, though, it’s clear that tonight’s performance has drawn a rather border demographic of attendees compared to what might constitute the ‘normal’ Sunn O))) crowd. So diverse is the crowd that at one point Subterranea finds itself brushing up against Jarvis Cocker in the men’s room, whilst the tweed-jacketed gentleman seated beside us has brought War And Peace to read whilst the vast hall fills up.

Bathed in near-total darkness and totally suffused by a choking amount of dry ice, when the quartet emerge – Anderson and O’Malley raising claws and wine bottles whilst vocalist Attila Csihar sits in lotus position at the front of the stage – and the first torturous chords are struck, the sense is that you’ve awoken in some sort of Soviet steel foundry, so oppressive is the minimal lighting and the spectacularly rich and consuming sound. Apparently, the band had blown an amp and even brought down a ceiling light during soundcheck, so perhaps this accounts for the comparative lack of volume at least. In fact, it’s not until Attila re-emerges for Hunting And Gathering (Cydonia) – dressed like a shattered mirror-ball Statue Of Liberty, complete with laser pointers – that the spectacle reaches its peak. Tonight may not have had the nasal-haemorrhaging power of their Temples set, but the slack-jawed, ‘serious’ musos leave in no doubt of the artistic legitimacy of Sunn O)))’s punishing oeuvre.