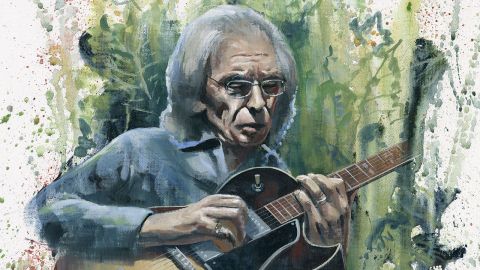 Love Is A River, the keynote track on Steve Howe’s first solo album since 2011’s Time, never quite does what you expect it to from one moment to the next. There are lovely hooks and melodies and refrains in there, but the structure of this six-minute song resists, at all points, doing what any songwriting craftsman’s textbook would. Let that charming guitar line settle in? No, move on. Repeat that kind of chorus section? Don’t be daft; maybe later. Do four of these motifs? Nah, how about three, or one?

It’s this restless refusal to do the obvious, or even the sensible, which has always distinguished Yes from the run of the mill. And more often than not, their mercurial musical decisions have involved their longtime guitarist. On occasion, sure, they’ve tripped over their ambition. But when it’s worked, they’ve struck rare, lofty magic.

Outside the band, Howe is no less peripatetic. The likeable Love Is may have
a gentle, warm feel overall, but within most pieces there’s an abundance of ideas. Don’t expect progginess of the labyrinthine stature of, say, The Revealing Science Of God (Dance Of The Dawn) here – at six minutes, Love Is A River is the longest. But picture a later Yes album, like Fly From Here, if it was homegrown and barefoot, relaxing in the sun with a welcoming smile on its face.

The 10 tracks on here do make one concession to structure: they alternate between instrumental and vocal pieces, five of each. The instrumentals are moods for a day, states of mind which Howe’s guitar took him into and which he explores tenderly, without tensing up. The sweet, shuffling Fulcrum, keyboard-decorated Pause For Thought and the at-first flamenco flavoured Beyond The Call (which gets busy and fuzzy midway like Mike Oldfield oomphing up Ommadawn) are delicately poised daydreams. Sound Picture allows some of his jazz-influenced inflections in through the window. It’s jerky and jumpy – a bumpy ride – then it isn’t, then it is again. The Headlands, coming towards the end, gets somewhat more rocky, chugging away as Howe’s lead spirals tastefully across its surface. It also, no doubt unconsciously, carries a faint melodic resemblance to Bob Seger’s Still The Same, which, to be clear, is a massive red herring. This album is not like Bob Seger. It really, really isn’t. But one has to call those unwitting faint similarities when one hears them.

Howe’s playing everything on here, except for when his son Dylan delivers drumming. On the vocal tracks, however, Jon Davison joins in with high harmonies and interjections as well as playing bass. As the now long-standing holder of the title of Yes’ Current Actual Official Vocalist, it’s no secret he can sing, but his bass playing will perhaps, to many, come as a pleasant surprise. And his voice is a huge boon here. With all the will in the world, Howe is a solid rather than outstanding singer, and Davison’s clever shading in, as the perfect foil, boosts the songs’ personality levels. He’s always respectful, knows it’s not his spotlight, but brings some zing to the tunes.

The theme of the album is, Howe has said, the importance of love, particularly as in love of nature and love of the universe. Ecology. The world he’d like to see his granddaughter grow up into. These common ideals trickle down throughout. See Me Through buzzes along with an amped up energy which wouldn’t have been out of place in one of Howe’s early 60s bands such as Tomorrow or Bodast. It’s a blast: Dylan’s drumming kicks. Mentions of ‘forests, streams and hills’ and ‘I could smell the daffodils’ sees our host taking us on a Wordsworthian trip, with a Proustian rush of Close To The Edge, at least lyrically (though not – don’t get over-excited – sonically).

The aforementioned Love Is A River flows happily despite its fidgeting, and an uplifting spirit runs through it, while It Ain’t Easy is an inoffensive mid-tempo plodder, kept afloat by the never less than guileful guitar tones. Imagination sweeps in with a flurry of Yes-like lead lines but then reclines back into something more akin to Asia’s AOR. Probably the best of the rest is the finale, On The Balcony, a paean to appreciating the roses and ‘just letting things be’. He’s ‘in a space, and the air is free’. He’d be great in a stay-at-home lockdown, if you could imagine such a thing. It’s a honeyed eulogy to mindful chilling out, but the trio make the very most of its ebbs and flows, and of course Howe scatters all manner of contrasting and complementary guitar lines, which tingle and thrill, over it. ‘All civilisation’s there’, he sings, and while Love Is is enjoyable rather than essential, one could equally apply that statement to his evergreen, inspired playing.