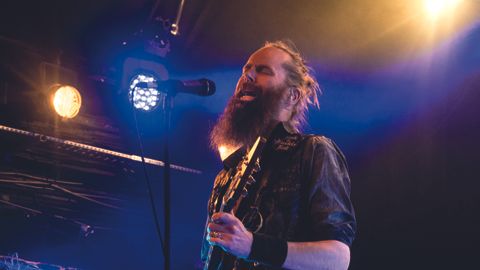 After releasing Mareridt, a record that toyed openly with black metal conventions and generated a sense of wonder that eclipsed the remaining trolls, expectations for MYRKUR [7] tonight couldn’t be higher. As willowy chanteuse Amalie Bruun drifts onto the stage, sandwiched between two hooded, guitar-wielding ghouls, and with a wealth of new material to showcase, the room seems to hold a collective breath. From the start the band make a hypnotic impact. Amid swirling, visceral noise, Amalie’s voice slices the hushed silence like frostbitten wind against blackest night. This is an otherworldly, sensory performance that draws on earthy folk elements and shadowy atmospherics as much as dark ambience. The band cast black magic spells over the crowd on a glacial Jeg Er Guden, I Er Tjenerne and Elleskudt, while Amalie’s spellbinding vocals are as sumptuous as red velvet on a foreboding The Serpent. Disappointingly, though, the more extreme elements of the band’s sound are reigned in tonight. When Amalie finally unleashes her startling, bloodcurdling shrieks it’s like watching Galadriel go full-blown, ring-of-power-hungry in Lord Of The Rings. It’s just a shame we don’t get to hear more of them.

The last time Reykjavík post-metallers SÓLSTAFIR [8] played London it was a heavily oversubscribed gig at East London boozer The Old Blue Last. It’s heartening, then, to see the Icelandic cowboys fill a room 10 times the capacity tonight, where their expansive, thundering sound can expand to fit all four corners. Red-blooded tracks Silfur-Refur and Ísafold, from latest album Berdreyminn, are enthusiastically received and they crash against the chilly, windswept riffs of Ótta like waves onto an abandoned beach, conjuring stark but always beautiful landscapes. Yet just as wonderful as the music itself, is watching the crowd react to it. As Sæþór Maríus ‘Pjúddi’ Sæþórsson and Aðalbjörn ‘Addi’ Tryggvason layer on richly textured guitars, pushing Köld to its elated peak, more than a few people are in tears. Goddess Of The Ages brings an evening of stunning Scandi-metal to an end, but before that Addi humbly recalls the band’s first time playing London to just 52 people. They might marvel disbelievingly at how far they’ve come since then but the key to their success is obvious. It’s Sólstafir’s ability to evoke deep emotional connections that makes them such a special band to so many people.