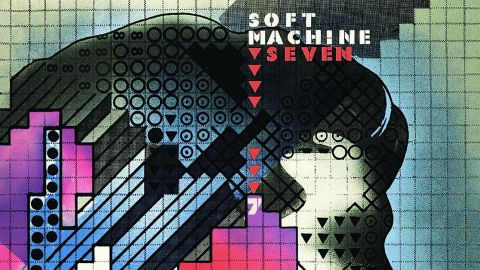 As with any long-lived band, fan opinions as to what counts as the best line-up will often be sharply split. In Soft Machine’s case, the most common divide usually starts with Robert Wyatt’s departure in 1971 and the arrival of Karl Jenkins in 1972. Aside from sentiment and personal taste, as with any group with an evolving line-up, the truth is that one is not inherently better than another but simply different.

Originally released in the winter of 1974, Seven finds a group far removed from their psychedelic origins. The tessellated rows of interlocking compositions are cosily homogenous when compared to some of its free‑flowing predecessors.

However, even within the album’s compact delivery, the fire and passion within the soloing counters the received wisdom that this era lacks feeling. It’s an album bristling with persuasive solos that leap with a rapid-fire invention, from Mike Ratledge’s darting synth runs on Nettle Bed’s roller-coaster rifferama to Jenkins’ ardent soliloquy in Tarabos. Then there are the sawing harmonics of Roy Babbington’s arc-bass in the dying embers of Down The Road, John Marshall’s continually shifting grooves, and the razor-sharp fuzz organ of Day’s Eye, one of Ratledge’s very best. It all flows with startling expressiveness.

Yet, outstanding as these moments may be, the cosseted ambient glow and textures permeating what is arguably the best-produced album of their career are just as vital. The constellations of high-register notes and purring, bass-end loops elicited from massed Fender Rhodes swirl in mesmeric drifts and snow globe patterns. Within that twilight world is a band comfortable and confident in their own skin.

With Music On Vinyl finally bringing together the five albums SM recorded for CBS, this pressing is particularly outstanding. Played back to back with an original ’73 release, the new 180gm edition of Seven wins out on clarity and adds extra depth in the bass, providing a richness that long‑term aficionados should relish.