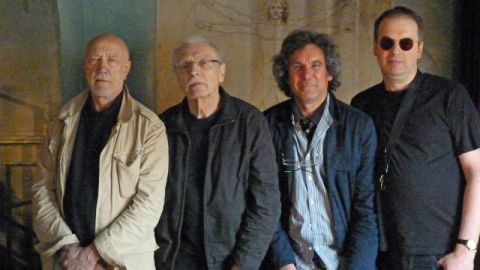 “We don’t do many gigs,” smiles John Etheridge, “so when we do it’s great! I spend half my life playing acoustic guitar, which is all a bit… nice. But this… is a pop group!”

You’d be hard-pressed to find the pop in Soft Machine’s complex noodlings, but you could pass them off as jazz. In fact, when Etheridge announces one more song and a fan shouts that they should make it a long one, he jokes, “Can’t, I’ve got to go and play the late set at Ronnie Scott’s…”

Tonight sees a dazzling display of musicianship, which may have drifted far from the original Soft Machine’s witty Canterbury-coloured psychedelia, but still offers challenging jazz fusion which honours the name. The line-up, loosely based on guys who joined in the mid-70s and previously known as Soft Machine Legacy – they’re now legit as Soft Machine – features Etheridge on guitar, Roy Babbington on bass, Nic France sitting in for the ill John Marshall on drums and multi-talented Theo Travis tackling saxophone, flute and keyboards. Their two sets of instrumentals build in slow-burn manner to a heady climax.

The venue is jam-packed. The audience is of a certain age, and some are on the stairs complaining of claustrophobia before the band have started. Once they commence their gently exploratory vibe, most relax. Bundles is followed by Chloe And The Pirates (there are many tributes to fallen former Soft Machine soldiers like Hugh Hopper), then Travis’ Voyage Beyond Seven leads into ’76’s Song Of Aeolus. As the first set ends, the sound’s excellent but we haven’t hit the heights.

The second set really lifts off with a rendition of Facelift, from arguably the band’s best album, Third. Etheridge ponders that every band has one number that becomes legendary and this is theirs, like their Peaches En Regalia. “No, no!” he has to explain to one whooping fan, “we’re not doing Peaches En Regalia!” Facelift elevates everyone, and even if Travis’ The Relegation Of Pluto is a bit of a slog, pieces like Kings And Queens and Hazard Profile are dispatched with delight. Etheridge’s playing, once acclaimed by Hendrix, is extraordinary.

This may not be the UFO Club or The Speakeasy or even the Paris Biennale, but the 2016 version of Soft Machine still celebrates the spirit of free-form invention. Pop? No. Far out? For sure.