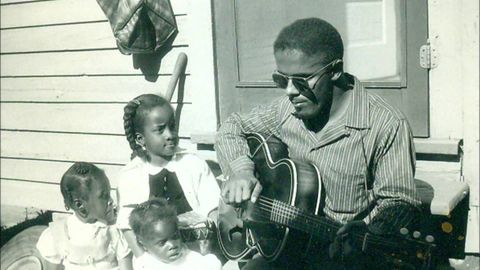 New Orleans Street Singer was Snooks Eaglin’s first LP, issued on Folkways in 1959, and That’s All Right followed on Prestige–Bluesville in 1961. Both were taped by the folklorist Harry Oster. They burst before the eyes of blues-lovers like firework displays. Eaglin, a blind New Orleanian in his early 20s, seemed able to play almost anything, and not only that, he could play it astoundingly well.

Mostly Eaglin chose to cover blues and R&B songs that he’d learned from the radio and from records, and these LPs are full of well-loved numbers from the first post-war decade, such as the likes of Drifting Blues, Let Me Go Home, Whiskey, Don’t You Lie To Me and One Scotch, One Bourbon, One Beer.

He either didn’t remember their words very well or didn’t care: many lyrics are stripped down to a verse or two, and sometimes even those are confused. However, that mattered less to the albums’ listeners than his two outstanding talents. His singing was suffused with a deep melancholy, as if every line were drawn up out of a well of loneliness, and his guitar playing was phenomenal.

Alexis Korner wrote at the time of the records’ original release that Eaglin had “a sense of dynamics too often lacking in current blues and jazz guitarists. Here is a musician who can swing on one note”.

Many jaws had dropped at the third track on the Folkways LP, a solo guitar interpretation of the New Orleans jazz classic High Society; Korner couldn’t forbear noting that there were a few technical errors but nevertheless he judged it to be “one of the most magnificent failures that I have ever heard”. His final verdict was that Eaglin was “a young man with virtually unlimited musical possibilities… [His talent] is always contemporary in the truest sense of the word”.

Oster’s recordings of Eaglin have already been extensively issued on CD by Arhoolie and Storyville, but Soul Jam now presents these LPs as they first appeared. So do they still live up to Korner’s estimation today? The answer is: emphatically. Eaglin’s every performance takes you on a journey, and even when it’s a familiar one, such as through Goin’ Down Slow or See See Rider, his sombre voice and rich guitar settings hold you utterly entranced.