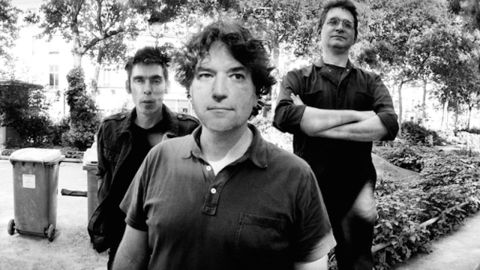 There's a moment in Shellac's live show which fans of the band have come to love. It occurs during performances of the song Wingwalker, the B-side of the band's second seven inch, Uranus, and sees Steve Albini, Bob Weston and Todd Trainer stretch out both arms perpendicular to their bodies and career around the stage while Albini screams “Look at me, I'm a plane! I'm a plane! I'm a plane!”

There’s an equally glorious moment on Dude Incredible, Shellac’s fifth album, and their first since 2007’s Excellent Italian Greyhound, where apropos of nothing in particular, at one minute and 12 seconds into All The Surveyors, Albini starts shrieking “Caw! Caw!” like a stricken crow. The live interpretation of this promises to be rather special.

Exactly how amusing you find this image will likely determine whether or not Dude Incredible is an album for you. For it’s fair to say that Shellac are not for everyone. The Chicago trio have made discomfort and tension their stock-in-trade, stretching ideas beyond their elastic limit, forever dwelling upon riffs longer than is strictly necessary, as a counterpoint to Albini’s terse, tar pit-black lyrical themes. Shellac songs are the handshake held a little too long, the laugh echoing a little too loudly, the unexpected overnight guest who’s still on the sofa at lunchtime – queasy listening even for those who consider themselves fans of ‘alternative’ rock. This, of course, has been Steve Albini’s modus operandi in every band he has fronted since he formed Big Black as a university dorm noise project in 1981. And while Dude Incredible isn’t as overtly confrontational as, say, Big Black’s 1986 masterpiece Atomizer – with its acerbic mediations on child abuse (Jordan, Minnesota), racism (Passing Complexion), domestic violence (Fists Of Love) and small town dysfunction (Kerosene) – it unsettles and challenges in more insidious ways.

Take, for example, Riding Bikes, a song ostensibly about adolescent hi-jinks and male bonding, which languidly strips back the surface veneer of fraternal nostalgia to hint at horrors unspecified, Albini’s unnervingly calm spoken word vocals imparting a sense of dread as he intones “I won’t second-guess something done with panic, in the moment, but I would bet the scale requires something like atonement. The men I answer to require answers of this town, get your folks together Ted, shit is coming down… we’re not riding bikes!’ All The Surveyors, a song inspired by an Albini/Weston conversation about America’s Founding Fathers, also begins in seemingly jocular fashion, with a Revolutionary War-inspired choral shout of ‘Fuck the King!’, but soon enters darker territory with acidic allusions to surveillance culture and state-sponsored human rights abuses, emerging as a scathing indictment of freedoms betrayed. With added crow caws, obviously.

The idea of broken trust and promises betrayed also emerges on You Came In Me, a succinct dissection of sexual politics, which sees Albini deliver the song’s title in a hurt and indignant tone. Politics on a broader scale is touched upon with the Occupy movement-inspired title of the instrumental The People’s Microphone, while the title track – on one level a black-humoured tale of a troop of horny monkeys on a hazardous quest for sexual congress – serves as a metaphor for corporate aggression and Hawk-ish militarism. The grinding Gary meanwhile, titled in ‘tribute’ to steel magnate Elbert Henry Gary, in whose honour the blue collar town of Gary, Indiana was named, deals with industrialisation and working class pride, with lyrics drawn from old communist folk songs.

Dude Incredible is rounded off by Surveyor – the third track on the album to feature that job title, in recognition of the fact that a disproportionate amount of America’s Founding Fathers held that profession – with Bob Weston quoting George Washington and Albini riffing upon expansionism and the notion of borders both physical and metaphorical. The title, of course, has a double meaning, for if Dude Incredible can be read as Albini’s latest (oblique) state-of-the-nation address, a recurring motif in his recorded output from day one, then its Shellac themselves who are the surveyors, assessing and measuring America’s moral and ethical climate with detached professionalism.

Within the media and music industry, Steve Albini is often portrayed as an irascible curmudgeon, a cantankerous old Luddite who stubbornly refuses to get with the programme. This, of course, is precisely what attracts a certain type of music fan to his output, yet it’s a reductionist, occasionally malicious, caricature of a singular artist whose unflinching, uncompromised vision has delivered some of the most searing, provocative albums ever birthed in the US rock underground. Dude Incredible stands comparison with the finest works in his canon, though, in truth, that’s one measurement about which Albini and his bandmates will be utterly unconcerned.