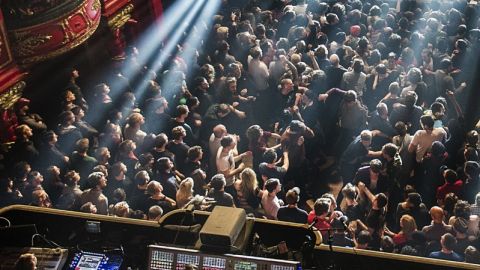 Hitting the stage at the ungodly hour of 6:30, POSEIDON [8] lay down an epic brand of crust-infused, slow-motion battering that hits like a blue whale. It’s so heavy, every toilet in the place stops working in protest at the punishment. A respected producer in his own tight, Tony Reed is a true 70s rock renaissance man, and MOS GENERATOR [8] show what a great guitarist and soulful singer he is. This is a band who deserve your attention now. While some seem to think they’re just another Wino project, for the doom connoisseur Scott Reagers is the voice of SAINT VITUS [9]. It’s a set heavily studded with classics from the first two albums – White Stallions and The Sadist in particular are blood-curdlingly joyous – as well as the underrated Die Healing. The recent addition of veteran Crowbar/Down bassist Pat Bruders in the stead of ailing Mark Adams adds some serious low-end and Vitus have never looked better. Scott’s take on Born Too Late is the epitome of heartfelt doom. Miserable perfection.