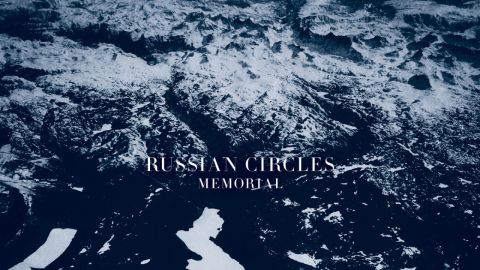 Opening Russian Circles’ latest record, the track Memoriam can be most aptly described as the calm before the storm. As Deficit roars from the speakers with an almost bitcrushed low-end guitar tone, it is clear that this album is an album intended to provoke, to confront and to stun.

1777 and Cheyenne may take the edge off slightly, veering away from the runaway freight train inertia of the opener and subsequent Burial. But even the most tender moments on Memorial – the gorgeous main tapping motif in Ethel – are shot through with a profound sense of menace.

The band’s deft control of atmosphere is the record’s greatest strength, even greater than the technical and musical ability of the group showcased on this instrumentally virtuosic collection of tracks. It isn’t without its moments of joy, but for the most part Memorial sticks to the mood you would expect from its name.

Closing on its title track, a spine-tingling and sparse collaboration with vocalist Chelsea Wolfe, the album clocks in at just 37 minutes, but that runtime seems hard to believe: how can something that’s so brief be so all-enveloping? Aspiring bands in this genre would do well to take note.