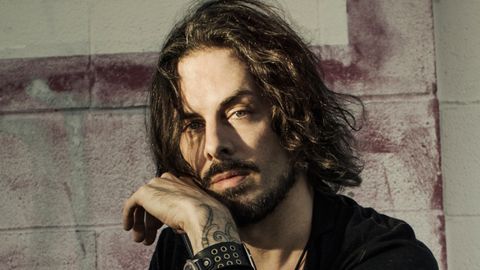 This past Tuesday Richie Kotzen (of Winery Dogs fame) performed a special solo show at London's Islington O2 Academy. But how was it?

If you like modern blues, The Konincks are worth checking out

Having only formed last year, tonight’s support are the latest in what feels like an endless line of retro diehards in bellbottoms and floral shirts emerging from the European blues scene. But despite the clunky band name, they’re the perfect choice for the night and win over an already packed room in a short space of time, thanks to the husky, Janis Joplin-esque tones of singer Jules Herzog. Watch this space?

Admittedly that may sound a tad far-fetched, but when you see the guitarist lose himself in the music and let rip on his trusty signature Telecaster, it’s like he’s drifting through the sands of time and channelling ol’ Jimi himself. Those sizzling single coil tones dialled into his vintage Marshall Plexi sound absolutely monstrous, leaving the entire room with their jaws locked firmly on the floor. And when they say it’s all in the fingers, this time it really is… Richie ditched the pick years ago.

Richie Kotzen plays guitar and sings better than you

You can’t help but marvel at not only Richie Kotzen’s fretboard mastery, but also a voice that rivals rock’s finest, falling somewhere in between Chris Cornell and Paul Rodgers. And to top it off, he effortlessly croons away over new songs War Paint and Cannibals, as well as fan favourites like Fear, You Can’t Save Me and Peace Sign without even breaking a sweat. At one point, he even picks up the sticks and starts grooving away behind the kit. Most people count themselves lucky to be great at one thing, but this guy…

Tonight is not about fretwanking

Granted, most of the guitar solos won’t fit into your standard eight bars, but Richie’s command of his instrument allows him to venture through minimalist soulful blues to mind-boggling jazz-fusion, without ever getting laborious or repetitive. If anything, his innovative, legato-driven brilliance was and still is a breath of fresh air in the Shrapnel Records scene of ‘shred til your dead’ gunslingers, who basically just play the same scales up and down as fast as they can.

He’s bigger than you think

After selling out Camden Underworld in 2009, Richie Kotzen has regularly packed out Islington Academy and, in more recent endeavours, with supergroup The Winery Dogs. His solo band opened up for The Rolling Stones in Japan and headlined venues twice this size in South America. So while his name may feel among the more obscure on this website and some of you will inevitably be scratching your heads thinking ‘Isn’t that the guy from Poison?’ – Richie has written nearly 20 solo albums, with countless other offshoots, collaborations and side-projects. Basically, he’s been a busy boy since those stints with Poison and Mr. Big which were, let’s face it, a long time ago indeed.