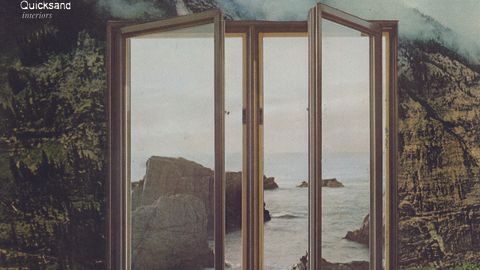 There are certain, special friends that come along who you can go for years without speaking to, but when you are given a chance to reconnect, it’s as if no time at all has elapsed. That’s exactly what the return of Quicksand feels like. It’s been 22 years since their last album, Manic Compression, and in that time they all moved on – frontman Walter Schreifels went off to form the excellent Rival Schools and various other projects, and bassist Sergio Vega ended up replacing Chi Cheng in Deftones. Quicksand, however, clearly never quite left them, because Interiors feels like coming home, as, workmanlike, they pick up where they left off without the slightest hint of nostalgia. This is post-hardcore to make the heart sing. Taut, rumbling basslines blossom into squalls of noise in tense opener Illuminati. Walter’s weathered rasp reveals a lived-in sense of emotion, particularly on the spaced, lonely, soul-searching expanse of Cosmonauts, while little moments of tripped-out dreaminess dance in the spaces left by cliff-edge-abrupt song endings. The melodies are stupendous but never flashy, making the washes of tortured guitar in Under The Screw all the more dramatic. Like their peers Jawbox and Helmet, there’s a sharp, thoughtful intelligence at work – every note is painstakingly placed for a reason, and the whole thing would collapse if it wasn’t playing its part. Quicksand’s influence on the post-hardcore scene of the early 00s was immense, but this album proves there’s no replacement worthy of the real thing. It’s taken two decades to get here, but Interiors is more than worth the wait.