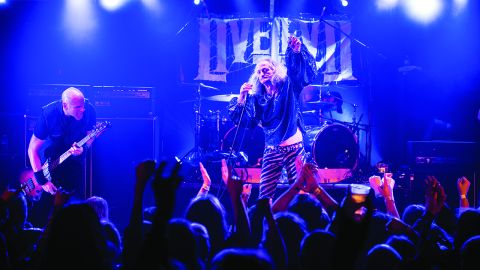 Turmoil in Greece, with striking air traffic controllers, has had a major knock-on effect on a number of tours and festivals, Live Evil included, and Deströyer 666 fall prey to a backlog of cancelled flights.

Pentagram find a way around this – driving 1,000 kilometres to Sofia in Bulgaria to catch a last-minute flight to make the gig, arriving late, and then finding a whole host of technical issues whilst a full house looks on expectantly. Looking more than a little fried from their hellish trip, they could be forgiven for turning in a half-arsed show, but having been given a shot after 40 years, wild-eyed madman Bobby Liebling isn’t about to let a little thing like the trip from hell stop them. Opening up with Death Row and All Your Sins, they hit like a steamroller: slow but unstoppable, while Victor Griffin’s trademark tar-pit guitar tone is a huge, chunky lesson in monolithic glory. If Liebling’s voice is suffering from tour nightmares then it’s not showing – his maniacal stare and demonic, Jagger-esque stage presence are a joyful celebration of doom metal’s eternal power and has hundreds of bullet belt and black leather jacket-clad thrashers utterly transfixed. After decades labouring in obscurity, Pentagram are finally getting their dues. Many bands tune lower, many bands pile their amps up, but none can match the power of Virginia’s masters of the riff.