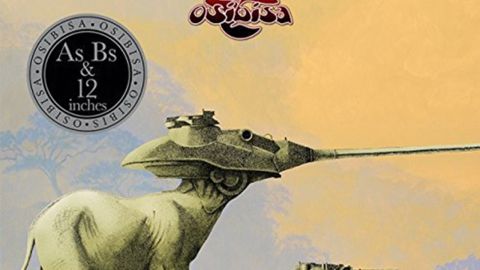 Before he went on to define prog album cover art with Yes, Roger Dean made sure that the 1971 debut album by groundbreaking Afro-rock ensemble Osibisa stood out in the record bins, supplying the sleeve’s distinctive elephant and the band’s lifelong logo. It was a crowning move for a band who presaged world music with their “criss cross rhythms that explode with happiness”.

This writer still remembers Osibisa devastating audiences with their pulsating percussion tear-ups, highlife horns and organ propulsion which made them the UK’s answer to Santana. Osibisa were formed in 1969 by saxophonist Teddy Osei, who had settled in London to study music on a scholarship from his native Ghana’s government early that decade. He invited his trumpeter brother Mac Tontoh and drummer Sol Amarfio to join him, also recruiting Grenadian bassist Spartacus R, Trinidadian organist Robert Bailey, Antiguan guitarist Wendell Richardson and Nigerian percussionist Loughty Lassisi Amao. While becoming the first black British group to cross over to white mainstream crowds, Osibisa gave the UK the kind of exciting world music melting pot which would be embraced in the 1980s thanks to Peter Gabriel and co but, until then, was almost a novelty. Although Osei had been forced back to Africa by trends such as punk and disco, he reformed Osibisa in 1996 and is still going. This four-CD set is a lovely document of his band, which collates their worldwide singles in all their configurations (complete with elephant tank cover). Many may recognise Sunshine Day, their biggest hit first released in 1975, but the set bristles with sumptuous examples of the band’s contagious, smile-inducing magic, which even graced the soundtrack of Blaxploitation movie Super Fly TNT. These include Music For Gong Gong, The Dawn and poignant vocal anthem which titled their second album, Woyaya. What you ultimately take away from this worthy retrospective is that Osibisa’s sound is one that can never date.