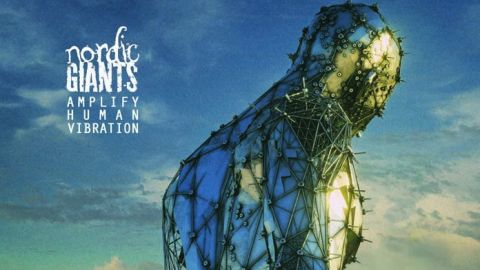 Nordic Giants have long been a captivating live band, but have never completely channelled their visceral stage performances onto a representative studio recording. With Amplify Human Vibration, a study of “human spirit”, they have perhaps finally succeeded.

Powerfully moody, there’s also gentle, uplifting triumph in tracks like First Light Of Dawn. Interestingly, the song also somewhat recalls the first album by Public Service Broadcasting, a sonic reference to be found many times on this record. While Dystopia has a hint of mid-career Maybeshewill, Spirit has a sound more uniquely Nordic Giants’own, with searing lead parts contrasted against warm, cinematic washes of backing chords and a brilliantly percussive climax. At this point, the use of somewhat prim vocal samples to add gravity to tracks has become somewhat out of favour in the post-rock scene, and that’s the only point on which the Giants stumble. Some heavy-handed sample use might detract from what would otherwise be potent instrumentals needing a little more mystery woven into their fabric, but post-rock is a meditative form, and the human voice drags the listener out of their reverie all too often during the running length of this release.