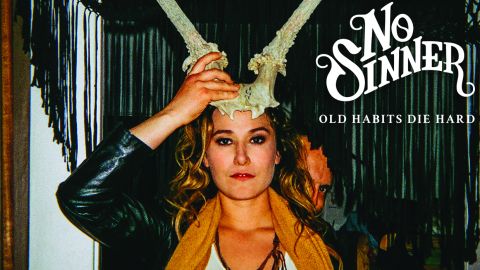 No Sinner are one of those bands that occasionally come along to shake the lethargy from the blues-rock brigade, their debut album Boo Hoo Hoo causing quite a stir back in 2014 with its brazen confidence and raucous energy. And in powerhouse vocalist Colleen Rennison, they introduced a frontwoman that could belt out raspy and soulful rock’n’roll before partying the boys under the table.

Album number two, Old Habits Die Hard, continues their rowdy ethos and suggests the Canadian rockers’ appetite for boozy nights and ferocious blues remains undimmed. Rennison describes the progression between records as “the difference between your high school grad photo and your first mugshot”, and has called this album “a rock’n’roll odyssey through heartbreak and debauchery, good times and bad”. All Woman swiftly confirms this with its snaking guitar line and lascivious vocal, while Leadfoot hinges on howling harmonica over a groove and pulsing rhythm section.

Indeed, the early part of the album barely takes the foot from the pedal, the Stones-like swagger and searing slide guitar of Tryin’ jostling alongside the full-tilt recklessness of Saturday Night. If Hollow is tinged with the regret of the morning after, Colleen displaying the full range of her smokey vocal, it’s not long before the salacious come-on of Get It Up takes everyone back to the party.

The band have gone for a bigger sound on this record, the stripped-back rawness of Boo Hoo Hoo being replaced with a more muscular production that allows the guitar of Eric Campbell and drums of Ian Browne to take advantage of a wider palette. Nowhere is that more evident than on Tomorrow Gonna Fade Away, an unexpected departure and a standout track. Light on its feet with undeniable pop hooks, its funk-infused bassline, choppy guitar and falsetto-leaning vocals suggest the band has been listening to Prince. Which can only be a good thing.

Albums of this nature are rarely complete without a rueful road song, and Stuck In The Middle ably ticks that box. The kind of wistful, country-inspired track that might find you on the wrong side of 3am, Rennison proves that her voice can genuinely be a thing of measured breadth and beauty when she eases back a little. Seemingly not a band to wallow for too long, though, One More Time waywardly veers between dreamy euphoria and erratic tumble, while Mandy Lyn is a low-down and grinding paean to sapphic love.