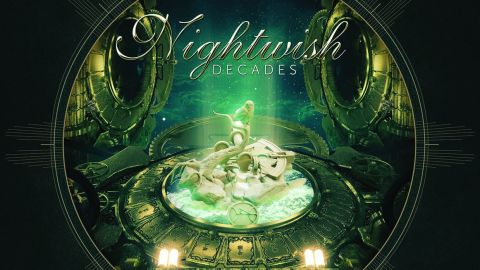 Nightwish are good at a lot of things, like symphonic prog metal, epic grandeur and melody, and you can add releasing compilation albums to that list. They reached No. 1 in their homeland Finland with a ‘best of’ back in 2015, but they’ve also flung together a ballad-only collection, as well as some other more inconspicuous anthologies too.

Their latest retrospective is Decades, a look back at their journey since their inception in 1996. Nightwish don’t look the same now as they did back then; original vocalist and band hallmark Tarja Turunen is solo after a messy split in 2005, while her replacement Anette Olzon only lasted five years.

But what has remained steady throughout is keyboard wizard, songwriter and leader Tuomas Holopainen, whose affinity for cinematic orchestration gives Nightwish’s imposing sound its true vigour.

Decades pays homage well to the band’s now hefty discography, with the album catapulting into life with the recent The Greatest Show On Earth, a 24-minute swashbuckler which includes a cameo from God-naysayer Richard Dawkins.

Elsewhere, prominent singles like Amaranth, Nemo and Wish I Had An Angel build a strong backbone to the two-CD release, while the beguiling The Poet And The Pendulum and Ghost Love Score present a bit of balance, nudging over the 10-minute mark and hinting at a welcome labyrinth of twists and turns.

Nightwish aren’t ones to skimp on the theatrics. They have their moments of unashamed cheesiness – Sleeping Sun is a slow-burner, while End Of All Hope veers dangerously into cheddar metal territory – but if you can stomach the saccharine then you’ll be just fine.

The record ends on a rare, bare-bones demo of the band’s early track Nightwish, which, at over 20 years old, provides an intriguing snapshot of how far the group have come. Never listened to Nightwish? Decades is a perfect place to start, but for the die-hard, there’s not too much to get worked up about.