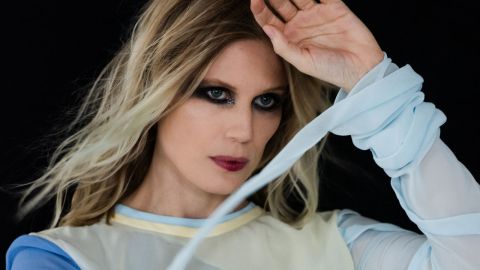 FOR FANS OF: Heilung, Valravn, Skáld

Since 2014, Myrkur, aka Amalie Bruun, has created an enthralling body of work that has blurred genres and aggressively rejected outdated notions of how metal should sound and who should play it.

2017’s Mareridt synthesised the divergent styles of previous efforts into a raw and emotive meditation of contrasts: the caustic roar of black metal tempered with funereal interludes of unbearable beauty.

If Mareridt mirrored the wild final throes of a fever dream then Folkesange is the silence that follows, like an echo seeping into ancient woods.

Folkesange unveils a captivating collection of largely new folk songs written in the old Nordic tradition. Ella, the opener, casts a reverential look at the past, rendered in ethereal harmonies, wistful lyrics and the thrum and drone of primal instruments.

Reaffirming her commitment to honouring the Scandinavian folk tradition, Amalie explains, “[Ella] is my ode to mankind and our connection with nature – a rite of passage as a woman and a rebirth-ritual in the sea.”

While nature dominates the lyrical themes, Leaves Of Yggdrasil, an English language song written by Amalie, spins a bewitching tale of love and loss. As a woman making her mark in a historically male-dominated culture such as metal, she knows well the sting of opposition and resistance.

It’s hardly surprising then, that Tor i Helheim explores the myth of the goddess Hel, the daughter of Loki, whose power was so feared by the other gods that they banished her to the underworld.

Connecting back to modern times, House Carpenter reimagines the old Bob Dylan song as if it were meant to be sung around roaring Viking campfires.

The complete lack of metal might alienate some listeners, but those open to exploring this exotic primeval realm will find a unique and satisfying voyage that all but eliminates the distance between our present and our past.