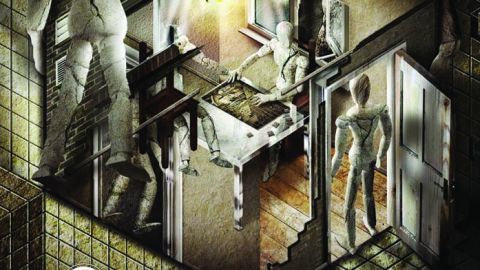 Damian Wilson wasn’t the only one to leave prog metallers Threshold earlier this year, you know. Guitarist Pete Morten quit the band after 10 years and two albums, with a tad less soap opera drama, to focus on his own project, My Soliloquy. It’s been on the go since 2002 (as Soliloquy), but new record Engines Of Gravity is only their second to date. Good things come to those who wait, it seems, as the album is an impressive take on prog metal, with soaring singing hovering over stellar songwriting. It’s obvious this is Morten’s baby, with the musician recording vocals, guitars, bass and keyboard alongside drummer Damon Roots. At times it’s personal stuff, with Darkness Is Gathering an introspective trip into the psyche. For fans of Devin Townsend, Haken and, erm, Threshold, the record isn’t groundbreaking, but it certainly isn’t forgettable either, with opener In Bed With The Enemy boasting a chorus as infectious as that cold your granny just sneezed onto you, while A Modern Lexicon chugs with stomping palmmuted guitar and demonic leads akin to Arcade Messiah. If this is what he conjures up post-Threshold, then going ‘solo’ might just be one of the best things Morten has ever done.