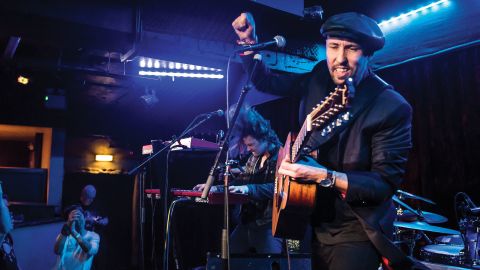 As quintessentially English as he is undeniably talented, Peter Jones – performing tonight mainly in his Tiger Moth Tales persona – has a healthy turn-out for his one-man support set. Showcasing tracks from the Cocoon and Story Tellers albums alongside his recent collaboration with Red Bazar, he also treats fans to a selection of his astoundingly authentic Genesis Nursery Cryme covers, including a glorious The Musical Box, resulting in a very enthusiastic audience singalong. Displaying his multi-instrumental skills by singing, playing keys with one hand and guitar with the other at many points within the set, while keeping time with an electronic bass drum, his performance is by turns entertaining, mesmerising and amusing. The Noel Coward-like The Merry Vicar provides light relief, and A Visit To Chigwick connects us to that long-lost childhood magical world that never was. Jones touches something very precious within the soul – if you haven’t checked him out yet, do so.

Getting a relatively rare opportunity to see this Swedish sextet is The Enid’s Joe Payne, amid a keen, sizeable audience. Fresh from a brief warm-up last night, supporting some band called Yes at the Royal Albert Hall, Moon Safari kick off an almost two-hour set with A Kid Called Panic, demonstrating many of their finest qualities. It’s upbeat, contains great vocal harmonies underpinning the blend of Simon Åkesson and Petter Sandström’s lead voices, melds Yes elements alongside bands like Supertramp, Kansas and Jellyfish, and employs considerable musical chops.

With hooks to die for, the great tunes keep coming – new song Emma (Come On) is a bouncy celebration, all lead guitar runs, organ stabs and marvellous voices, and it pulls off the neat trick of making 9⁄8 sound funky. As one of the band’s signature tunes, the variety, tempo shifts, Queen-inspired interludes and catchy melodies of Mega Moon disguise its eight minute length. The multi-vocal and delicate piano interlude of Southern Belle contrasts with the majestic Heartland with its jazz-fusion middle section. And all the while the band keep the energy levels up, Simon Åkesson especially moving around between keys, singing and jumping around.

In a tour-de-force set-closer, we get the epic – in form and length – Lover’s End Pt. III – Skellefteå Serenade. There are monster guitar solos from Pontus Åkesson, dazzling keyboards courtesy of Sebastian Åkesson, a big audience clap-along, a lighters aloft invitation, and almost two minutes of a gradually building crescendo at the end. The band return briefly to perform the beautiful, a capella Constant Bloom, concluding what has been a strident, moving and multifaceted show. On the strength of tonight, here’s one band that should definitely be on any self-respecting symphonic prog fan’s radar.