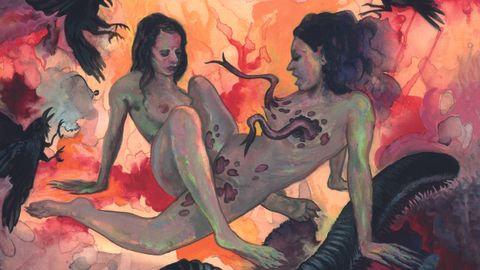 Cleveland’s black hooded, one-man riff machine Athenar is back for the attack with yet another slab of Motör-charged Venom-worshipping filth. Three years – and seven EP/splits/compilation releases – since No Mercy For Mayhem and the focus is very much on Newcastle circa 1982, although, as titles like Penetratal Ecstasy and Bitch Mongrel suggest, Cronos has been spliced with a young Peter Steele. Elements of Carnivore have seeped in and not just in the ‘is he/isn’t he’ deadpan humour and explosive enunciation. Midnight’s proto-black/speed/thrash attack is less about specific genres and more about 80s black leather bike jackets. Is it black metal, rock’n’roll or punk? All of the above and, as usual, delivered with snarling conviction and plenty of lo-fi hooks. Sweet Death And Ecstacy is as catchy as it is filthy – like an audio STD: the perfect soundtrack for both drinking and devil worshipping. The CD also comes with a second disc of classic Midnight material as well, an absolute (Faustian?) bargain.