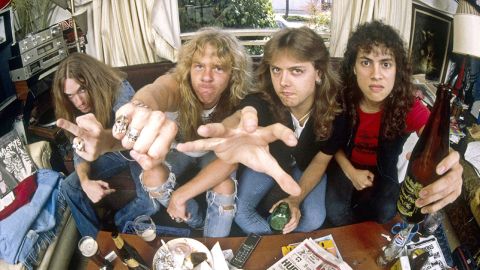 Arriving with a thud on the mat, with far more bottom end than …And Justice For All, there’s a satisfying heft to Metallica’s back catalogue, in both size and weight, that eminently befits the density of the music it contains. With a relatively convoluted provenance – different pressings of various masters have appeared over the years – and leaving the minutiae of respective audiophile merits to those fonder of such things, the versions here appear on the band’s own Blackened imprint, created in 2012 when they reclaimed their catalogue from Warners.

The first three albums receive the single-disc treatment, both S&M and Garage Inc. are triple platters and the rest are doubles. Perhaps unsurprisingly, there’s no sight of Lulu.

It’s a cliché, but aside from the emotional punch of revolving black plastic cranked up to window-vibrating levels, it’s the artwork that evokes memories of the impact these records had upon their release. The four sullen youths peering out from the rear of Kill ’Em All’s crude and bloody effort give little clue to the heights that would be attained. And that’s the real pleasure of a set like this – plotting the band’s trajectory over 25 years. Where’s the bass gone? How many riffs? Welcome back, guitar solos! Metallica have always been a story as much as a band, one that’s told here as it should be – loudly.

In 1983, Kill ’Em All (8⁄10) planted the first true thrash marker on an unsuspecting world, straight out of the blocks with an unsettling intensity and high-tempo fury. Hetfield’s guitar sound combines the sensibility of NWOBHM with punk’s snarling edge, a breathless assault on the senses, and at the time, a genuinely dangerous and extreme diversion from the norm. It still sounds as fresh as it ever did, and although lacking the range of latter releases, as stall-setting indicators go, there’s more than enough bedrock for a solid career foundation.

It was with the following year’s master class, however, when it became apparent that something truly special was cooking. Ride The Lightning (9⁄10) shows a staggering evolution of musical ability and ambition, and the first whiffs of melodic nous. Fade To Black can be viewed as a primer for career-changing Nothing Else Matters, and the ominous intro to For Whom The Bell Tolls hits the ground full pelt, Cliff Burton’s unusual descending high-end bass figure a pertinent example of the band’s self-assured approach. And then there’s The Call Of Ktulu, a reinvention of everything that had come before, almost impossible to plot back to anything on their debut. It’s a remarkably swift maturation.

Though less of a leap stylistically, 1986’s Master Of Puppets (10⁄10) distilled and refined the band’s strengths into an unassailable block. Eight songs, just under an hour’s running time, thematically drum-tight, epic and progressive, it was a sharp poke in the eye to metal’s then-current conventions. And no one was singing about having a good time, girls or goblins. Rather, hypocritical authority, drugs, madness and ire were the subjects de jour, unified by a wall-of-sound production job and more world-class riffs than should exist outside of a greatest hits record. It remains their high spot.

Both monolithic and hook-y, it shifted three million units without airplay, propelling them out of the underground and into the mainstream with zero compromise or artifice. Hyperbole is not an attractive quality in music criticism, but it was lavished on the album unsparingly upon its release, and deservedly so. ‘Fuck it all and fucking no regrets’ indeed.

It’s hardly a new story, but needs must in any retrospective analysis: the production on …And Justice For All grows more puzzling as the years fly by. The petty hazing of Jason Newsted remains a churlish nadir, his bass rendered virtually inaudible, and a pancake-flat mix with fizz for guitar and click for snare takes any shine off what in other aspects is their most dense and elaborate album. Mysteriously enough, this is the only vinyl not available for review at the time of going to press, Universal’s vague assurance that it’s “TBC” and will come out “eventually” only arousing more suspicion that a serious remaster or remix is being mooted. Watch the skies. Or perhaps YouTube – a few bedroom techies have had a go at it.

There’s something about handling a new, shiny copy of Metallica (aka the Black Album, 9⁄10) that takes you back to 1991 – its obsidian sheen entirely redolent of its fictional forefather (you know, the one on Polymer records) – and reminds you just how difficult the trick they pulled off with it was, leapfrogging into superstar territory with a narrow tightrope walk between historical credibility and commercial reach. Iconic for some, a predictable sell-out for others, all aided by the strong winds of MTV and producer Bob Rock’s clean layering, it has sold around 20 million copies, which is a whole lot of beans by anyone’s reckoning; Enter Sandman alone is up to 48 million plays on Spotify.

By any reasonable reckoning, these dizzying heights would never truly be revisited or re-revisited even, at least not in terms of musical cohesion within the album format. Still pushing at boundaries on Load (7⁄10) five years later – an admirable characteristic that shows no sign of abating – adding a mishmash of southern-tinged boogie and countrified ballads to the pot always felt a tad pedestrian for such pioneers, and they never really had enough swing to convincingly roll, as Keef might put it.

Reload (6⁄10) still sounds like, if not an afterthought, then a quick back-pedal to counter any residual criticisms, seemingly confirmed by the back-to-basics Garage Inc (8⁄10) that followed: a satisfying trawl through some of the band’s favourites. The primal take on Discharge’s Free Speech For The Dumb is a particular delight.

The full orchestral treatment on 1999’s S&M (8⁄10) was a typical Metallica left turn, throwing up the sometimes overlooked gem No Leaf Clover. But from here on in, it’s the law of diminishing returns writ large, though the louder the critical quibbles grow, as an entity, a brand and certainly live, the world’s biggest metal band have merely swelled in stature to galaxy-sized proportions.

And who cares if swathes of St Anger (6⁄10) and Death Magnetic (6⁄10) can’t recreate the initial excitement of milestone releases? There’s always an arc to any decent story or career, and in the case of time-serving behemoths, age and longevity will always be key plot points. If they released Master Of Puppets’ equal next week, it would never be viewed as such, and out of time and context could never replicate its impact.

And when there are enough bona fide, stone-cold classics in the vault to fill four-hour sets for ever, Metallica don’t have to prove anything, already standing shoulder-to-shoulder with their equals: Black Sabbath, AC/DC, Led Zeppelin.