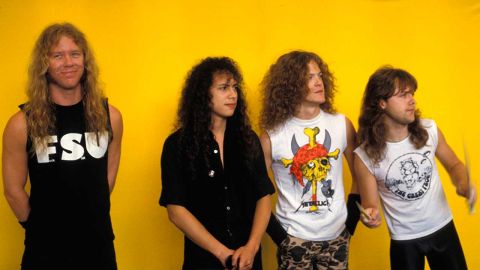 Presumably re-issued to commemorate the, erm, 31st anniversary of its original release, Metallica’s legendary 1987 EP remains one of the most stupidly exciting records in the band’s intermittently revered catalogue. The first Metallica release to feature then new bassist Jason Newsted, Garage Days Re-Revisited came between the career-defining majesty of Master Of Puppets and the bold, prog-tinged splurge of ...And Justice For All: a snotty five-tracks covers EP that, at the time, seemed to confirm that not only was everything back on track after the death of Cliff Burton, but that despite their impending fame, they were still very much in tune with the grubby metal and punk scenes that spawned them. You might reasonably argue that the entire NWOBHM nostalgia industry grew from this one record, as these spiky, loose-limbed assaults on songs by Diamond Head, Holocaust and Budgie were most fans’ introduction to those bands’ oeuvres. Of the three, Diamond Head’s Helpless remains the highlight, while Newsted’s thunderous intro to Budgie’s Crash Course In Brain Surgery is still amongst the most joyous noises you will ever hear. No wonder the fans took to him so readily.

Meanwhile, Metallica’s ferocious take on Killing Joke’s The Wait (not included on the EP’s originally UK release, but present here) is an eerie joy and, most famously, their gleeful decimation of the Misfits’ Last Caress/Green Hell proudly muddied the waters between punk and metal and, ultimately, must have bought Glenn Danzig at least one new house. Yes, the whole thing has been remastered and sounds great, but this was never an exercise in sonic perfection: instead, crank it up and enjoy the sound of one of metal’s greatest ever bands saluting their heroes and kicking out the jams.