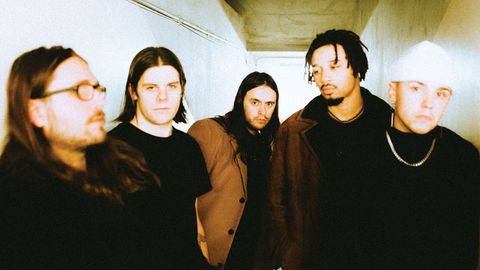 Loathe – I Let It In And It Took Everything

FOR FANS OF: Deftones, Slipknot, Radiohead

Liverpool’s Loathe have made an explosive impression on hearts and minds across the UK with a multitude of multimedia live dates and festival sets. Their amalgam of hefty, downtuned riffs, experimental electronics and lacerating screams have already endeared them to a growing, loyal crowd.

I Let It In And It Took Everything expands the palette with which they work and, if there’s any justice in the world, should assure the ambitious quintet’s rise to the pinnacle of the British heavy underground music scene.

Loathe’s second full-length opens the band’s sound up to lush, shoegaze textures and shimmering guitars, as exquisitely displayed on Two Way Mirror and A Sad Cartoon.

The genesis of this exploration could be seen on the track White Hot, taken from the band’s split with Holding Absence in 2018, but here they take those opulent elements a step further, proving that Loathe aren’t a band content with sticking to the same rigid formulas as their peers.

Fans of hard-hitting, fist-to-the-face brutality need not worry, though; there
is no sense that Loathe have dialled anything down, something clearly evident on the searing, two-minute expulsion of twisted ideas on Red Room, the apoplectic savagery of Broken Vision Rhythm and the scorching black metal mimicry of Heavy Is The Heart That Falls With The Weight Of A Thousand Words.

Elsewhere, Is It Really You provides a ballad of sorts without sounding insipid or syrupy, while Screaming flits effortlessly between driving alt-rock and incandescent white-hot fury, proving they’re able to truly hybridise as opposed to simply tack disparate elements together.

If the modus operandi for this album is to ensure that Loathe can no longer be pigeonholed, I Let It In And It Took Everything is a job well done, and is sure to be instrumental in putting them on the map as one of the most exciting bands to emerge from the British underground in a long time.

I Let It In And It Took Everything is out now via Nuclear Blast and available on CD and Vinyl.