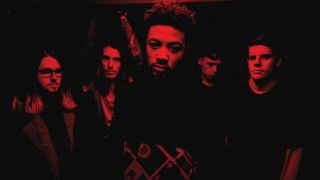 Few bands wish to be confined to easily categorisable genres, even if they do little to differentiate themselves from a horde of similar-sounding acts. While Liverpool upstarts Loathe are also keen to stand out from the crowd, they actually back up their desire with debut album The Cold Sun: a dizzying, uneasy affair that throws all manner of sounds and ideas at the wall and yet makes them all stick. The only comparisons that can be made are with other pioneering acts who refuse to be shackled by tags and parameters.

“We didn’t want to be pinpointed as one certain thing,” asserts guitarist Erik Bickerstaffe, and one listen to their album will attest to his claim. Industrial-flecked spats of hardcore meet rousing choruses straight out of the block; Meshuggah’s rhythmic complexities and nightmarish tones take a descent into darker realms; lush vocals float over a bed of electronic spats, and dense barrages unfurl into sweeping post-rock soundscapes. Loathe headed all the way to Atlanta to record with Matt McClellan (Being As An Ocean, The Devil Wears Prada) in order to fully capture the scope they’ve been gravitating towards since forming from a collection of stagnating projects in their hometown, and The Cold Sun works as a serious statement of intent as well as an absorbing maelstrom.

Such is the band’s aspirations that this aural drama is played out over a concept, with a post-apocalyptic narrative that mixes desolate themes and moods with an overarching sense of positivity and heroism that’s certainly a tonic to the desperate times confronting the modern world. But surely combining such warped musical sensibilities with a concept album on a debut must have proved a hell of a challenge?

“Honestly, it’s always something we’ve wanted to do,” claims Erik, whose ambition, integrity and emphasis on pushing himself and his bandmates to their limits are palpable. “After our first EP we were able to take our ideas to their full extent. The way we write our music is to use imagery and create atmosphere. We don’t find it hard to write to a basic outline to follow.”

As well as stretching themselves on record, this is an approach Erik aims to replicate to even greater degrees in the live environment, despite the current restrictions of a band still in their infancy on the live circuit. “The atmosphere is very important to translate in the live setting,” he says. “We have computers to help those elements live because of where we are now, but it’s definitely something we want to expand upon.”

While their debut’s sound and story conjure vivid images of distant wastelands where only the strongest survive, Loathe have set out their stall to be amongst those who thrive straight from the off.

SOUNDS LIKE: A mix of hardcore, tech and anything else they fancy

FOR FANS OF: BTBAM, The Devil Wears Prada, Code Orange

THE COLD SUN IS OUT NOW VIA SHARPTONE