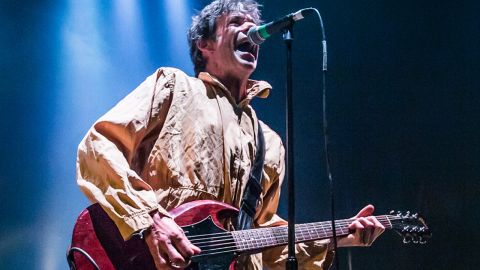 For the first half of this show – the band’s first in London since some time last century – they walk the traditional Replacements tightrope, teetering giddily somewhere between the shambolic and the sublime.

Intros clatter, endings collapse. There is brilliance, and there are false starts and bum notes. A thrilling charge through opener Takin A Ride is countered by a wretched Tommy Gets His Tonsils Out and the closing Third Stone From The Sun section is mangled horribly. It’s exciting, edge-of-the-seat stuff, but it’s a mess.

In the absence of any consistency, it’s the tiny moments of transcendence that stand out, like Westerberg launching into the opening chords of I Will Dare as the final notes of Androgynous fade away, leaving no room for applause. For someone whose timing can be so erratic, he has extraordinary timing.

Then the magic happens. A 120mph thrash through Chuck Berry’s Maybellene tips into a plaintive Can’t Hardly Wait, and the shout-along Bastards Of Young somehow stumbles into a delightful, woozy skank through My Boy Lollipop. It’s chaotic, but it makes perfect sense.

The momentum gathers, the set careers along like a startled horse, and hit follows hit follows hit. It all ends with a joyful romp through The Only Ones’ Another Girl, Another Planet, and then one of our purest rock’n’roll bands are gone.