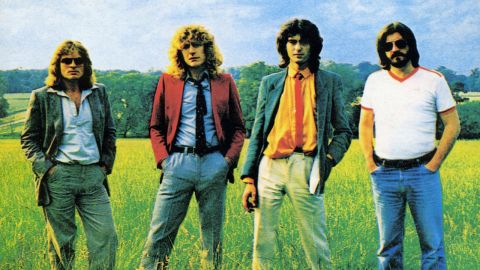 And so to the third act, the denouement; the last tranche of reissues wherein the mothership’s fins had started to loosen, and a slow, drawn-out decline ensued. At least that’s how the conventional narrative has it, but like many narratives, it only reveals a partial truth.

It’s one that’s expanded upon here and given a shift in perspective by a striking collection of working mixes and a pair of previously unknown instrumentals, one of which – the peculiarly titled 10 Ribs & All/Carrot Pod Pod (Pod) – is so unlike anything else in the canon, an aural double-take and a quick check of your source is the only honest initial response.

Although well-documented personal adversities and escalating habits had put the band on the back foot, 1976’s Presence (9/10) was both the nearest Zeppelin ever got to recreating their live power in a studio setting, and the album that bears closest inspection and repeated listening when the familiarity of earlier high spots has been exhausted.

Page’s intuitive, piercing solo on Achilles Last Stand – the rough mix presented as Two Ones Are One – is undoubtedly on a par with its more celebrated twin on Stairway To Heaven, and Tea For One’s languid re-channelling of Since I’ve Been Loving You simmers with an easy grace.

Considering it’s essentially Page’s album – guitar strong, keyboard light, Plant confined to a wheelchair – the aforementioned 10 Ribs… is even more remarkable. A six-and-a-half-minute expansive, piano-driven, lounge-esque drawl, recalling Elton John, Billy Joel and the outro of Layla along the way, it’s a cinematic climax to a New York night, the theme tunes from Hill Street Blues and Taxi percolated through an English filter. It’s far more in keeping with the milieu-reflecting mindset of In Through The Out Door than the album whose cut it just missed. It’s impressive and not a little disquieting. While it might be a stretch to say the history books have to be rewritten, it raises questions about its pedigree, and why it has been hibernating all these years.

Listening to the earlier mixes accompanying 1979’s In Through The Out Door (7/10) is to be transported to an alternative universe where songs named Blot, The Epic and The Hook (I’m Gonna Crawl, Carouselambra and All My Love respectively) jostle with a scruffier, rambunctious Hot Dog and a sparser In The Evening, the drone intro truncated and Jones’s synths high in the mix.

Talking of whom, with Page in relatively diminished circumstances, Jones’s input is markedly to the fore, with modulated keyboards, synth stabs and poppier arrangements. Whether viewed as a gamely response to the influences of the day or an uneven attempt to hop aboard the zeitgeist, it’s clear that the world and the band had changed considerably in the preceding three years, and even if events hadn’t transpired as they did, it’s debatable whether there was still enough magic within reach to convincingly suggest a new dawn was imminent.

The real nuggets have been saved for last, and they’re no fool’s gold. Coda (7/10), itself a contractual hotchpotch of career-spanning outtakes, is the only reissue given the three-disc treatment, with a total of 15 extras as disparate as the album itself.

A startling and wholly different recording of When The Levee Breaks (If It Keeps On Raining) features a more understated vocal melody and a shuffle drumbeat replete with exquisite hi-hat work and more swing. Sugar Mama is a two-dimensional whip through an amalgamation of early blues markers, Plant’s voice in eye-popping effect. Meanwhile, an instrumental Poor Tom actually benefits from his absence, the ballsy folk stomp X-rayed to reveal intricate lattice-like interactions.

Travelling Riverside Blues and Hey, Hey, What Can I Do, as high-calibre as they are, you’ve probably already heard. Two tracks from 1972’s Bombay Orchestra sessions – Friends, Four Hands (Four Sticks) – can be viewed as an Indian primer to the more fully realised North African interpretations on Unledded.

10 Ribs… aside, the other big surprise here is the inclusion of St Tristan’s Sword, a track so mythical even Zeppelin obsessives considered it a legend. In truth, it’s a tightly woven jam from 1970, more of an antecedent to Dazed And Confused’s live mid-section than a stand-alone piece, a signpost to future virtuosic workouts.

Signing off with Everybody Makes It Through, an alternative take of In The Light, proves a far more fitting swan song or coda than that of four decades past. Of course, it’s not outside the realms of possibility that more live recordings may eventually surface, but for now… that’s it.