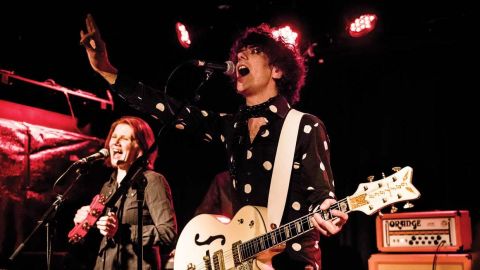 When Knifeworld played this venue in 2014, it was off the back of signing to InsideOut and releasing second album The Unravelling. That gig was rammed to capacity, so it’s no surprise that tonight has been sold out for weeks in advance.

This ‘evening with Knifeworld’ will feature two sets, one acoustic and one electric. Feel The Sorcery opens the acoustic set in upbeat fashion, and introduces a brace of tracks from 2016’s meditation on death, Bottled Out Of Eden. Foul Temple is achingly poignant, the three-piece wind and brass section harmonising a plaintive last post for the newly departed.

Frontman Kavus Torabi displays an effortless Adrian Belew-like facility in vocalising while nailing the tricksy guitar arpeggios in Lowered Into Necromancy. Like the latter incarnations of King Crimson, having an octet at your disposal opens up all manner of possibilities for arrangement. Where that succeeds most is in the chamber/jazz orchestration of A Dream About A Dream and The Skulls We Buried Have Regrown Their Eyes. Staccato blasts from the woodwinds and discordant repeating piano figures recall such avant-garde greats as Steve Reich and John Zorn. A mightily impressive feat, but then Knifeworld aren’t your typical prog outfit.

Torabi apologises for potentially having brought some of us along tonight under false pretences – there are to be no new songs in either set as they wouldn’t fit the band’s current configuration. He announces: “We have big ideas that would not translate. You’ll see.” The tease.

After an intermission, it’s time for the electric set. The drone intro to High/Aflame begins its mantra and the atmosphere is charged. When the psychedelic tour de force reaches its first crescendo, it explodes in a firework display of brass and riffs. For all their knowing complexity and avant-garde influences, this collective really know how to get a crowd bouncing.

The Germ Inside and I Am Lost keep the energy level high with funky, syncopated rhythms. Torabi seems to be channelling his muse, reaching a hand out across the audience, a bug eyed, manic, shamanic preacher. Despite their leader’s magnetic presence, it’s rare to see a band so democratic in their performance. No one individual’s contribution can be singled out – this is an ensemble in the truest sense. But that’s not to say there aren’t problems. Some changes could be tighter, punchier. Put that down to nerves, onstage sound issues, lack of rehearsal… who knows?

It’s nothing that couldn’t be improved with a little more preparation. Torabi dedicates Send Him Seaworthy to “my sweet captain”, Tim Smith of Cardiacs, whose financial struggle in getting the health care he needs has been widely publicised in recent times. A selection from the early EPs follows in the Zappaesque mini-epic HMS Washout and The Prime Of Our Decline. These more obscure gems are the equal of the album tracks. For instance, the beautiful minimalist mid-section of Destroy The World We Love is Reich’s Octet turned up to 11.

The encore of debut single Pissed Up On Brake Fluid absolutely rocks – a prog Saxon with lyrics Lemmy would have been proud to pen: ‘I still get my kicks from the treble-six’! And Me To The Future Of You is a triumphant, anthemic closer.

The gig’s live Facebook stream boasted 2,000 viewers. What they, and we, witness tonight is a consolidation thus far of the career of a unique band, one who have yet to create their masterpiece and break through to prick the consciousness of the global prog community. It’s coming. Attendees of this year’s Cruise To The Edge will find that HMS Knifeworld is more than seaworthy.