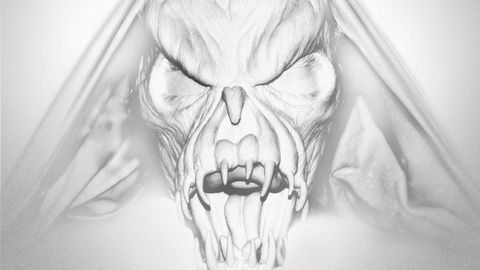 With a quarter-century of rocking under their studded belts, German power metal pioneers Gamma Ray have done much to shape and defend a genre that’s endured more than its fair share of brickbats over the years. Of course, with their penchant for cheesy lyrics and twee melodies, they’re also responsible for some of power metal’s worst excesses and this, their 11th studio album, will prove as divisive as ever.

With its epic feel and Sabaton-style refrain, Avalon kicks things off in familiar fashion, although things soon take a darker turn. Indeed, aside from the stridently upbeat Master Of Confusion – as featured on the 2013 EP of the same name – Empire Of The Undead is moody by the band’s usual standards.

Mainman Kai Hansen’s always had one eye on world affairs, so it seems that the marked downturn in this area is naturally filtering through to his lyrics. Long-term fans needn’t panic, though, as in the likes of Born To Fly and Seven, there’s still plenty of traditional fare to chew on.