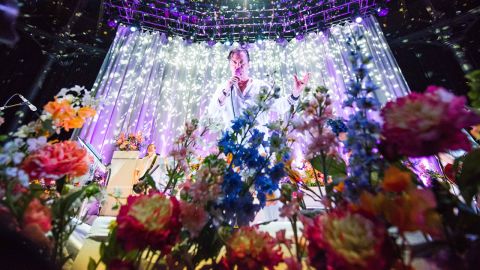 Time, they say, is a great healer. In the late ‘90s when Faith No More hated each other, hated their audience and their audience was starting to tire of them, you could have seen them in far smaller venues than The Roundhouse. Venues that were far from full. Tonight, mere days after they played to a heaving field at Download, tickets are like gold dust. And they will be again tomorrow, when they headline this venue once more. It’s tempting to suggest that this is the power of nostalgia in full effect – tempting but inaccurate.

Because tonight as Faith No More step on stage, clad all in white and surrounded by the hilariously un­metal surroundings of fresh flowers, and Roddy Bottum teases out the sombre piano march of Motherfucker, the excitement is palpable. Opening with a new song when you have so many killer anthems in your arsenal is exactly the unexpected curveball you’d expect from the band. But there aren’t many bands that could expect such a unanimously positive response from brand new material.

Obviously Faith No More aren’t the same as many bands, and, seven years on from the delirium that greeted their return, it’s heartening to see that new album Sol Invictus has been as embraced by the fans with the same degree of love that was put into the creating of it. Both the weathered bombast of Matador and the spiky, evil funk of Superhero are greeted like classics. Not only that, but the approach of Faith No More is still as confrontational as ever. Singer Mike Patton, as dry and sarcastic a frontman as you’ll ever see, goads the crowd throughout and the band veer from the swinging slide guitar of Evidence to the speed metal roar of Digging The Grave as if it’s the most natural thing in the world rather than the dizzying head fuck that it actually is.

And, of course, when Faith No More do drop those genre defining classics it is still a breathtaking thing to behold. The crowd singing Midlife Crisis back to them a capella as they look on unimpressed (before sliding into a lounge version with a disco beat) is pure FNM. This is bolstered by the screams and croons Mike Patton shifts through in the blink of an eye on The Gentle Art Of Making Enemies, and that famous rhythm section of Billy Gould and Mike Bordin spanking out the oh-so familiar riff of Epic.

Not a moment of their 90 minutes onstage is wasted – there isn’t a cliché or an easy way taken for a second. “We have a problem Roundhouse,” states Patton before We Care A Lot closes their set, “We love you.” It’s more our problem, Mr. Patton. Even 30 years into a career his band are still waltzing effortlessly out in front of the crowd. Obtuse, unusual, in a genre of precisely one. How did we ever survive without them? Don’t ever leave us again.