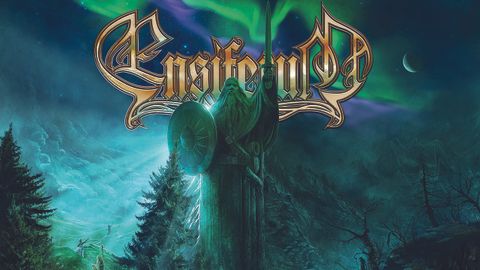 It’s hard to believe a whole decade has passed since Ensiferum released Victory Songs. Their third album, it was their first to feature the fierce harsh vocals and axe-wielding abilities of Petri Lindroos, and it firmly established them as a live favourite at a time when Finnish folk metal was exploding and swords, shields and drinking horns were omnipresent at every outdoor metal festival. Out of the plethora of bands that cropped up back then, Ensiferum are one of the few still going strong and they’re sounding better than ever on new record Two Paths, presenting a heavy, organic and modern update to their sound. Bookended by two Finnish-language songs, Ajattomasta Unesta (‘Out Of An Ageless Sleep’) and Unettomaan Aikaan (‘Into A Sleepless Age’), it’s an album full of their signature high-energy riffing, warlike choral chants and contagious folk melodies. One thing that’s apparent as soon as the joyous For Those About To Fight For Metal kicks in is the more organic sound of previous album, One Man Army, as they build songs like the fantastic title track around more guitar-centric melodies – and to their credit, do away with keyboards altogether in favour of the digital accordion. Played by the outrageously talented Netta Skog (formerly of Turisas), the instrument lends texture and weight to the defiant Don’t You Say and Feast With Valkyries. Interestingly, both Don’t You Say and the furious God Is Dead have two versions, alternating classic Ensiferum with shades of punk rock. In a subgenre where novelty can become tiresome all too easily, Ensiferum have refreshed the folk metal sound.