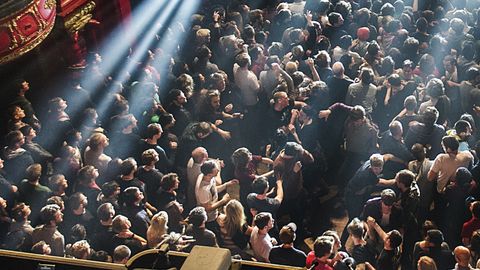 This is reflected in the supports, as well as the number of black T-shirts in the audience.

Opening are atmospheric Glaswegians Fvnerals, who deliver a set of alternately spectral and pummelling tunes. The songs prove extra-visceral, given the size of venue and proximity of the audience.

Having released the split record The Time Between Us with Rundle this year, Evan Patterson was an obvious choice for touring partner. Tonight he’s playing as Jaye Jayle, his side-project alter ego. While initially his music seems to stem from Americana or American gothic, his use of drone notes and mastery of reverb quickly reaffirm shoegazing credentials. As a result of this blend of genres, there’s an element of Slowdive or Mojave 3 about his sound, though to free up space for his vocal to take centre stage, Jaye Jayle tend towards monotones over complex chord progressions. The set is an unexpected pleasure, and it passes all too quickly.

With a full band, Emma Ruth Rundle sometimes struggles to cut through vocally, but the extra instruments flesh out the album tunes more fully.

Most of the songs played are taken from 2016’s brilliant Marked For Death album, but there’s also a couple of older tracks including fan favourite Haunted Houses from Some Heavy Ocean. The tracks that elicit the strongest reaction are the more recent ones, with even Distance from her split with Jaye Jayle – for which she is joined on stage by Patterson – getting a warm response.

Rundle’s gauzy blend of singer- songwriter tropes with post-rock and shoegazing atmospherics works well on record, but in this packed basement tonight, the extra indistinctness caused by reflections off the walls makes the songs even more ethereal and noisy. While Hand Of God and Heaven are highlights of the set, and Marked For Death is predictably brilliant, Protection is little short of elemental, with her vocal climbing to precarious heights before breaking off.

It might have been nice to have heard Medusa from the last album, as well a few more songs played by Rundle solo, but overall, it’s an excellent set.