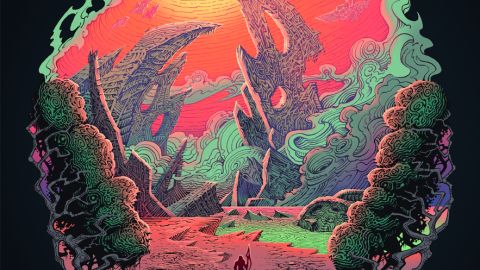 After releasing a brace of warmly received EPs, Scotland based Dvne (pronounced “Dune”) unveil their debut album and it’s every bit as epic as anyone could have hoped for. Weaving a tale centred around the return of an empire that was believed to have been lost thousands of years ago, it’s a sci-fi-infused, utterly crushing 60 minutes. Taking influences from post-metal, death, prog, stoner rock and more, as well as the back catalogue of Tool, the genre-straddling Asheran is rich with ideas and ginormous riffs. Opener The Crimson Path sets out Dvne’s stall strongly and is crammed with tasty Celtic and Middle Eastern flavours while Viridian Bloom also impresses and is a heart-swelling listen driven by soaring guitars. Though there are tracks that feel a little bloated (Descent Of The Asheran), they sign off in style with final number Scion. A labyrinthine, boundary-pushing song that rewards with repeated listens, it sees the quartet at the peak of their powers.