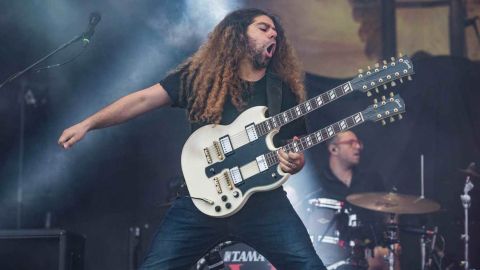 While the rain breaks with long-held tradition by failing to lash down, this year’s Download Festival is stricken by another foe: the wind. For much of the weekend, westerlies whip across the site, and while this might not affect some of the more musically straightforward acts, it plays havoc with the sound of anyone on the outdoor stages whose ouvre is naturally more complex.

On the main stage, Mastodon suffer as much as anyone, and it’s only six tracks into the set, when the thunderous Black Tongue rises like a weary monster from the murk, the audience is permitted to hear the band as they should.

The Contortionist fare better as they’re playing under canvas, but their set clashes with Friday’s main stage headliner, and only a couple of hundred fans witness a set that’s strong on stuttering rhythms, mixing moments of tense anticipation with intense, explosive fury.

SikTh provide one of Saturday’s first communal moments with a shattering Skies Of The Millennium Night, but again the wind is a factor, and some of the band’s wild complexity is whisked off on the breeze towards the wrestling arena. Singer Mikee Goodman does his best to compensate, dominating the runway and dedicating Flogging The Horses to “hateful, warmongering fucks”. The lurching grind of Golden Cufflinks also works well.

Over on the second stage, Coheed And Cambria open with the churning Welcome Home as the skies begin to broil, but the rain never comes and the lovely, winding solo on The Willing Well IV: The Final Cut is one of the weekend’s highlights. The band’s only words are to introduce themselves before their last song, but Devin Townsend makes up for it by being extremely chatty, even providing a running commentary on his own running commentary.

“A smattering of applause,” he notes, after introducing the monstrous Supercrush!. “The crowd goes mild,” he adds, before drawing attention to an inflatable doll in the crowd. Brutai open the final day by asking the crowd to sing along with the crunching Deep, but it’s evidently too early in the day for such frivolity, although Flood does feature some great synchronised headbanging.

Both Anathema and Opeth fare better, the former by providing some much-needed light and shade with singer Lee Douglas’ graceful voice, the latter through Mikael Åkerfeldt’s natural charm and stunning versions of Cusp Of Eternity and Deliverance, a song Åkerfeldt describes as being “three weeks long”.

The weekend ends in chaos as The Dillinger Escape Plan play their final UK show, the band’s furious, metallic intricacy matched only by a complete disregard for their own personal safety.